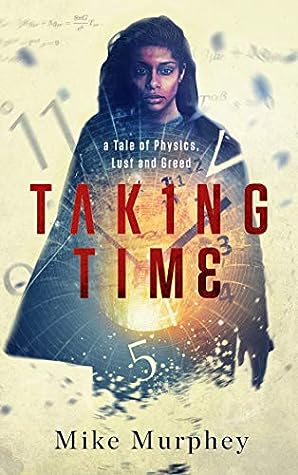 ❋ ❋ ❋
I received an ecopy from Reedsy Discovery in exchange for an honest review.
The year is 2044. Housed in a secret complex beneath the eastern Arizona desert, a consortium of governments and corporations have undertaken a program on the scale of the Manhattan Project to bludgeon the laws of physics into submission and make time travel a reality. Fraught with insecurities, Marshall Grissom has spent his whole life trying not to call attention to himself, so he can’t imagine he would be remotely suited for the role of time travel pioneer. He’s even less enthusiastic about this corporate time-travel adventure when he learns that nudity is a job requirement. The task would better match the talents of candidates like the smart and beautiful Sheila Schuler, or the bristle-tough and rattlesnake-mean Marta Hamilton. As the project evolves into a clash between science and corporate greed, conflicts escalate. Those contributing the funding are mostly interested in manipulating time travel for profit, and will stop at nothing, including murder, to achieve their goals.
I've always been a sucker for time travel science fiction novels, so when I had the opportunity to try Taking Time by Mike Murphey from Reedsy Discovery I knew I had to give it a shot. The synopsis and short preview I tried before deciding to pick it up sounded incredibly promising with a good deal of potential. Now that I have completed this first installment of an upcoming trilogy, I can officially say that this is a solid read. There are elements that I particularly enjoyed such as the time traveling itself, the parallel worlds and concept of a multiverse that exists in conjunction with team's time travelling exploits. Then again, there are also elements that I could have done without as well. I knew going in due to the disclaimer on Reedsy Discovery that there was going to be some explicit content, but honestly over the chapters that honestly began to grate and wear thin.

In regards to the elements I appreciated about this novel, I'll begin with the time travel itself since after all it's what I came to see. The how in Murphey's novel isn't quite unique but it's still pretty cool to read about. In the story, the time travelers minds are projected back into their past, or potentially, future selves. They don't particularly travel great distances in time due to certain limitations. Plus, those funding the project are greedy and are attempting to use time travel for financial gain. As I mentioned earlier, one of my favorite aspects was learning that what they're involved with may be effecting parallel worlds. What little bit we get to see of the multiverse from the perspective of our characters when a projection goes awry was a highlight of the story for me. Let's just say that the face of humanity is different there. I'll admit that I totally had the Silurians from Doctor Who in the back of my mind.

Then, there were the elements that just didn't quite work for me. The nudity element of time travel didn't bother me at first since within the story, the time travelers need to be naked in order to travel in time safely and make it home whole. Marshall, the lead character, really focuses on the nudity and it becomes a joke that goes much too long. Seriously, I have a feeling that several pages could have been deleted without hurting the main storyline. And, of course, Marshall and the good looking women on the team end up having sexy times. I wasn't prepared for them to use to their time travel missions for so much sex. Again same as before, quite a few pages could have been deleted without harming the main storyline and I would have been perfectly fine with that. Basically, I was in it for the time travel, not so much that other stuff.

Overall, Taking Time by Mike Murphey is an intriguing time travel novel that mostly worked for me. There were some aspects that I wasn't quite prepared for that ran on too long for my tastes, but for the most part the elements I enjoyed outweighed them. As of this point, I wouldn't have the subsequent installments of the series at the top of my to be read pile, but I'd still wouldn't mind seeing where the series goes from where it left off. Thanks again, Reedsy Discovery!
My review is also on Goodreads and Reedsy Discovery.