The Whisper by Jared Millet - Review 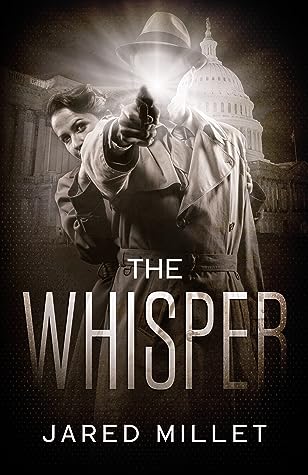 I received an ecopy from Reedsy Discovery in exchange from an honest review.

Washington, 1958 - Intrepid newshound Allan Jones is chasing the scoop of his life: a political assassination plot by a sinister cabal known as JANUS. Unable to trust the authorities, Jones and his colleagues at The Washington Street have mere days to unravel JANUS's secrets. Enter The Whisper, a mysterious vigilante who saves Jones's life before throwing him further into danger. Using futuristic devices to walk through walls and turn invisible, the Whisper can go anywhere and inform on anyone. Nevertheless, Jones never knows when he can count on the Whisper's assistance, or whose side the Whisper is on. As the clock runs out, Jones finds himself homeless, penniless, and on the run from the police, the NSA, and the FBI. While JANUS and the Whisper do battle using impossible weapons of tomorrow, Jones must somehow uncover a conspiracy, prevent a murder, and survive long enough to let the truth be known.

The Whisper by Jared Millet is an addicting new noir mystery thriller with the right dash of sci-fi elements to make things extra interesting. I have always been a sucker for anything at all noir-eque whether it be in print or onscreen, so when I saw this on available to review via Reedsy Discovery I couldn't resist giving it a try. I'm very glad that I did too because this short and quick novel hit almost all the right notes in my book. It can be very tricky to come up with a unique new noir story while remaining true to the genre, but without it becoming too terribly corny in the long run. And like I said, Millet's new novel really works.

Right from the very beginning, I was hooked on his brand of story telling. It has all the classic hallmarks of the classic noir style. I'm glad I read the short excerpt available on Reedsy to just to prepare myself for what I'd be getting into in the novel. The snippet does a wonderful job at outlining it's overall potential. The plot twists and turns will keep you on the edge of your seat, the dialog, and the futuristic tech was a lot of fun to see. My only complaints are that I felt a little too disconnect from the cast than I would have preferred to and that at times it's a little all over the place as if it's trying to do a little too much. Regardless, these issues aren't nearly enough to dampen my enjoyment of the tale.

Overall, this is an enjoyable new novel that will go very fast and won't let you go. If you're a fan of classic Hollywood film noir plus Flash Gordon, The Shadow, and Back to the Future, then I have a feeling you'll enjoy The Whisper by Jared Millet quite a bit. I'm going to have to try more from this author in the future. Thanks again to Reedsy Discovery.

My review is also on Goodreads and Reedsy Discovery.