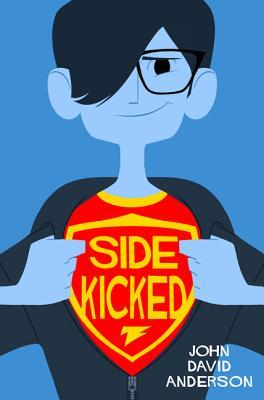 Andrew Bean, aka The Sensationalist, is a thirteen-year-old middle-schooler and member of H.E.R.O., a superhero sidekick training program. For Drew, that doesn't mean leaping tall buildings in single bounds mainly because his power is heightened senses. His sense of smell, hearing, sight, taste, and touch are some of the most powerful in the world. Also there's his mentor, the Titan, a former Super legend who now spends most of his time in bars. As for Jenna, his best friend, their relationship would be complicated enough if she couldn't throw a car the length of a city block. Figure in keeping his life as a sidekick a secret from his family, and middle school can be a real pain. Of course, that's before a supervillain thought dead returns to the city and superheroes begin to disappear. Until now Drew has always been able to easily separate good from evil, but what happens when that line starts to blur?

Sidekicked by John David Anderson is super fun. If you like Sky High, The Incredibles, Marvel, or DC, you will probably get a real kick out of this. I don't read many comics, but this definitely reads like a classic superhero comic, or the Marvel Cinematic Universe which I love. This novel is a great addition to the superhero and action/adventure genre.

I really enjoy Anderson's world-building when it comes to creating Drew's unique, but relatable world including Justicia, the OCs, the law enforcement officials, and H.E.R.O. (aka the Highview Environmental Revitalization Organization as a cover, and by the way, the club goal is to keep trash off the streets). I love that the secret entrance involves the staff lounge, a vending machine, and pork rinds and watching Drew and the six other sidekicks-in-training practice their unique abilities, and job basics like combat training, lockpicking, and advanced chemistry.

The characters are all well-written and could all stand to have their own story. It is refreshing that Eric, a scene-stealing sidekick, is deaf. I particularly enjoyed Drew's sense of humor throughout the story and he's very believable as an ordinary kid. For the most part, his fellow sidekicks seem like real kids I could have met back when I was in middle school, sans powers of course. By the way, one of the major themes is looking beyond the surface (which does happen a bit in superhero stories), but Anderson does it remarkably well.

Overall, Sidekicked is a fantastic, fast-paced, twisty, action-packed, and clever middle-grade novel that should be read by anyone with an interest in heroes and villains!

By the way, the Jack of Diamonds, one of The Dealer's henchmen, is supposed to sound exactly like: