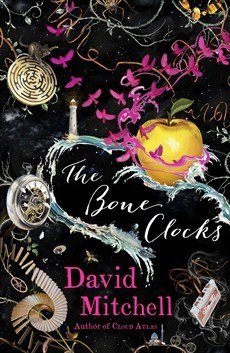 Holly Sykes has a natural sensitivity to psychic phenomena, and she can hear what she calls "the radio people". As a teenage runaway, she attracts the attention of a cult of dangerous mystics and their enemies, right in the middle of a war. Her lost weekend during this time is right out of a nightmare, for both herself and her family, but it is unfortunately just the beginning. The mystery surrounding disappearance of her kid brother that weekend will go on to dramatically affect the rest of her life.

I've never read anything by David Mitchell before this, but I thoroughly enjoyed The Bone Clocks. I can already say this review will not live up to the book, primarily because I don't want to get too far into spoiler territory, but I was hooked from the get go. I actually listened to the audiobook which is brilliantly performed by multiple narrators.

I enjoyed reading the characters, and attempting to figure out how they all connected to the story and to Holly's life. As for likeability, some weren't likeable at all and others were very much so. Holly begins as not all that likeable, but she really grows into herself over the course of the story and became a great character. I also particularly enjoyed the time jumps (and narrator switches) between each interconnected section. It allows us to get a good look at Holly from the outside at various points in her life. My personal favorites were the first three which feature Holly, Hugo, and Ed. The story is able to go from realism, magical realism, fantasy, to post-apocalyptic over the 60ish years it spans. I particularly enjoyed the language and writing style.

Overall, I greatly enjoyed The Bone Clocks and if you're at all interested in any sort of fantasy or Mitchell's work, this isn't to be missed. I definitely plan on reading Cloud Atlas in the near future.

It's interesting to consider this story in terms of just having read Doctor Sleep by Stephen King and Incarnate by Jodi Meadows not long beforehand.

This is how I imagined Hugo Lamb: 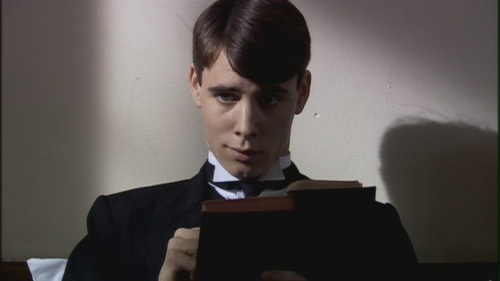 I listened to this audiobook from November 3 - 12, 2014 and my review is also on Goodreads.