Orange is the New Black by Piper Kerman - Review 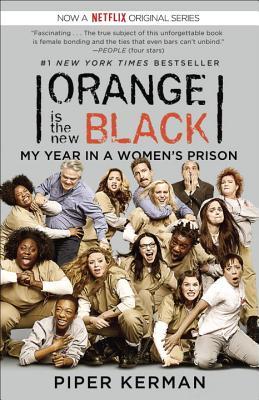 Ten years ago, Piper, a privileged white girl with blonde hair and blue eyes, was mixed up in an international drug ring. Now, just when she's found the right man and became a good member of society, the past catches up with her and she finds herself having fifteen months in a federal prison.

To begin, I've never seen a single episode of the tv show, but I'd seen the book floating around and it sounded interesting enough (and I've heard great things about the show), so I decided to see what the hype was all about. For the most part, her memoir of the fifteen months she spent in prison is well-written and entertaining.

However, it is quite shallow. It seemed to me that she just barely brushes the surface of that fifteen month sentence and all of the other people meets in prison. Whether she wants to admit it or not, it sounds like she definitely did time at Club Fed. Her experiences weren't great, but they sure sounded a lot nicer than I expected. One of the things that got old fast for me was hearing how pretty, young, and white she is throughout. It sounds like she got through a lot or got a lot of perks because of her looks.

Like other readers, I would have liked a more detailed account that dug below the surface of prison life, and perhaps a short epilogue to mention how things are going since her release. I may have to see how the television adaptation compares.