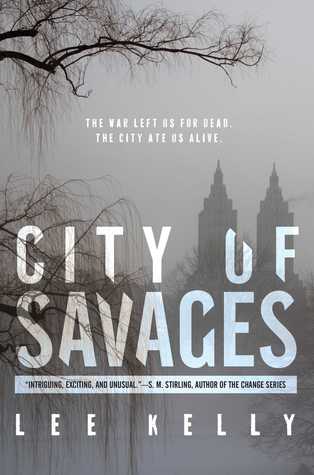 About twenty years ago, the Red Allies first attacked New York City. Manhattan is now a POW camp ruled by Rolladin, the warden put in place by the enemy who is also a prisoner, and her brutal warlords. In Sky's opinion, the city is nothing but a vicious cage, but to Phee, her younger sister, it's the only place she can call home. After all, it is the only thing either of them have known, since their mother firmly believes that the past should stay in the past. Then, they discover their mother's old journal chronicling her life before the war began and the war's early days and the two sisters realize that there is a whole lot more to the city and their mother than they ever knew. When strangers from a country thought to have been destroyed by the Red Allies come to the POW camp's annual census, the sister's begin to actively uncover the island's long-kept secrets and Rolladin's lies to her fellow prisoners begin to fall apart at the seams.

City of Savages by Lee Kelly will probably go down as one of my favorite reads of 2015. It's a fantastic post-apocalyptic stand alone novel and I wish I could revisit the characters and find out what happens to them after the novel ends.

The novel, rather than being action-packed, is very much a psychological, character-driven story of two sisters as they fight to keep their family together and safe in the Park. The narration is split with alternating chapters between both Phee and Sky. Each have distinct and unique voices so it's easy to keep track of which sister is speaking. This dual perspective also allows the reader to get an inside look at each of their mindsets, which are sometimes quite different. I liked both characters equally as both are easy to relate to for a variety of reasons. The vivid characterizations and the way the author tells the story are my favorite aspects of the novel. Kelly's brilliant writing adds layers of realism, grit, and intensity that really make it standout from the crowd.

Although there isn't exactly a lot to go on, I would also like to mention how much I liked the world-building. To start off, we're essentially thrown right into the story with very little information to start with. We get enough to understand their landscape, but not much else. For me that really worked, I liked seeing the Park through their eyes, but then again another one of my favorite aspects of the novel is learning about the past. Sky and Phee's mother will not speak of the past, but then the girls come across her old journal documenting the fall of Manhattan to the Red Allies. I don't want to give anything away, but those sections were fascinating and could easily make a great pre-dystopian companion novel.

Lee Kelly's City of Savages is brilliant debeut and ranks as an absolute must-read for 2015. I will be keeping my eyes on this author's work.