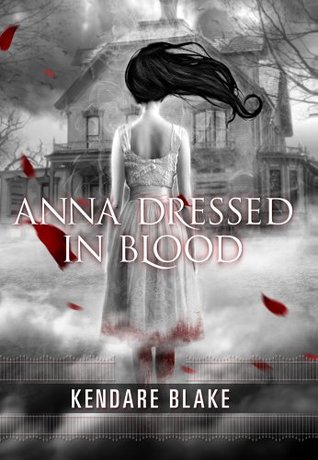 Cas Lowood works in the family business just like his dad did before he died a gruesome death - Cas kills the dangerous dead. He travels the country with his mother, a witch, their cat, which has the ability to sniff out spirits, and his mystical athame, a blade that puts ghosts down for good. Cas expects the usual when they're are on the trail of a ghost called Anna Dressed in Blood. Instead, he finds a ghost bound in curses and rage like no other he has ever encountered. This ghost has killed everyone foolish enough to step foot inside her home since her brutal murder in 1958, except one. For some reason, she spares Cas's life.

Anna Dressed in Blood by Kendare Blake is perfect for fans of television's Supernatural. There's a high chance you'll like it if you are a fan of Buffy the Vampire Slayer, too. This is pretty high praise coming from me seeing as those are a couple of my favorite tv shows. I mean, the main character is named Cas (short for Theseus Cassio, but whatever) and another character is named Will Rosenberg. Anyway, Cas is a strong character and his voice comes across very clearly on the page. He's a realistic character and seems like someone who should exist outside of the page, regardless of the ghost hunting aspect of the story. Not to mention the fact that he is also quite clever. While this story is very much his, Anna plays a vital roll as the ghost unlike any he's encountered. The characters are exceptional as is the captivating mystery they find themselves in the middle of. The horror elements are also pretty awesome, and I like where the author goes with the mythology. However, I'm not sure sure why Cassandra Clare's blurb calls it "romantic" - sure, there are touching moments between the two characters, but I wouldn't call it a romance, especially if take into consideration the scene where she rips a guy in half. Overall, this is an awesome series opener and I'm really looking forward to seeing these characters again in Girl of Nightmares.