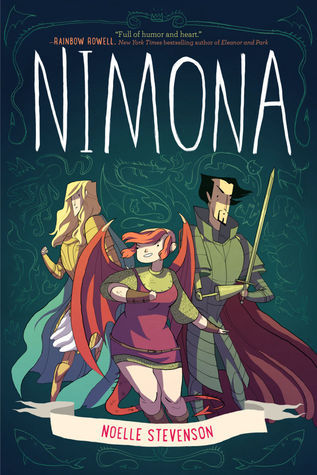 Nimona, a reckless young shapeshifter, signs on as the sidekick of Lord Ballister Blackheart, a villain with a vendetta against Sir Ambrosius Goldenloin and the Institution of Law Enforcement and Heroics. Nimona and Blackheart are going to wreak major havoc and show the world that Goldenloin and the Institution aren't the heroes everyone thinks. As Blackheart sees that he has less control over Nimona than he thought and as small acts of villainy turn outright vicious, he realizes that Nimona's past is as murky as the extent of her abilities.

Nimona by Noelle Stevenson is so much fun and has the perfect sense of humor! I really enjoyed getting to know these characters and the world they inhabit. They're all so charming and make you want to like them regardless of what they've done, especially Nimona. She's so unique and utterly herself and not necessarily what you would expect of her. When it comes to Blackheart, while he has standards he's not exactly the villain and it's fantastic to watch him play off of Nimona.

The setting in this story is also pretty awesome. I love the traditional fantasy elements of knights and magic mixed with sci-fi and science! I didn't think this combination would work as well as it did, but it ended up being one of my favorite aspects. It really gives Stevenson and her characters so much more room to play.

Finally, I highly recommend this graphic novel. If you checked it out yet, you're really missing out on one of the best reads of the year! There's so much more I would love to see these characters do - maybe we'll get another full graphic novel featuring these awesome characters in the future.


I read this graphic novel on November 23, 2015 and my review is also on Goodreads.