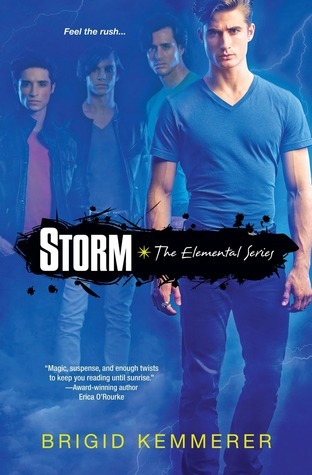 Becca has had to deal with a lot of crap since her boyfriend started spreading malicious rumors about her because now she's getting attention from all the wrong kind. Then, she helps out Chris Merrick in the school parking lot when he's in a very tight spot. Turns out he's very different from the average guy - he can control and manipulate water. Just like his brothers can fire, earth, and wind. Each has the ability to control and element, which means they are quite powerful and dangerous with enemies just around the corner. Since Becca now knows the truth about her classmates that means she's in danger, too. She thinks she can trust Hunter, the new kid at school, but when he keeps showing up at the most inopportune moments and goes up against Chris she's not so sure. She does know one thing - there's a storm coming.

This series has been recommended to me so many times, so when it was available for free on Kindle I jumped at the chance and picked it up. For the most part, I really liked it and the mythology behind it. Even if it isn't exactly original it was still a lot of fun. I liked getting to know Becca, Hunter, and Chris and his family. There were moments when the love triangle aspect began to grate on my nerves, but it's reigned in pretty well. The same goes for the assault Becca deals with from her classmates. Overall, I'm really excited to continue the series because there are so many characters I want to know more about. If you liked Obsidian by Jennifer L. Armentrout, Immortal City by Scott Speer, and fast paced paranormal or urban fantasy stories with a sharp sense of humor, you'll definitely enjoy Storm, the first novel in the Elemental series by Brigid Kemmerer.