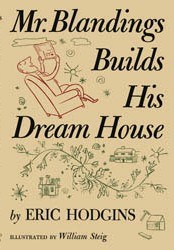 Mr. Blandings, an NYC advertising executive, and his wife and kids want to leave their tiny Midtown apartment for a farmhouse in the country. The place they end up buying, and get thoroughly ripped off on, should have been demolished years ago, so they'll need build a brand new house. Pretty much everything that can go wrong, does go wrong while trying to design and construct the perfect home. This house may be the nightmare that does him in, or bankrupts him.

I picked up this novel published in 1946 because I love the hilarious movie starring Cary Grant and Myrna Loy, which was released in 1948. I didn't release until very recently that it was actually based on a very real book. Since the movie is so great, I expected the book would be just as good, if not better. As it turns out, the movie is by far better. The book doesn't really have the sense of humor or charm of the adaptation. Don't get me wrong because it has it's moments, but it's not nearly as fun. There's not really much when it comes to character development - we don't even know the Blandings' first names. The tongue-in-cheek style of writing is very sarcastic and dry, but it is very wordy - often using ten words when one or two would work just as well. As you can imagine some of the paragraphs got very long.

There were a few scenes that I would have liked to have seen in the movie, though. For example, Mr. Tesander's story about that time he drilled an 851 foot deep well for a client and never hit any water, just ruined his equipment and then the client died before paying him; the new neighbors who are building a shack on two acres of their property and they were only charged $65; the newspaper article where the local historical society wants to sue them for tearing down the third oldest building in the county; and finally the full painting scene that would make any painter in their right mind cringe.

Final verdict: Skip the book, watch the movie instead.