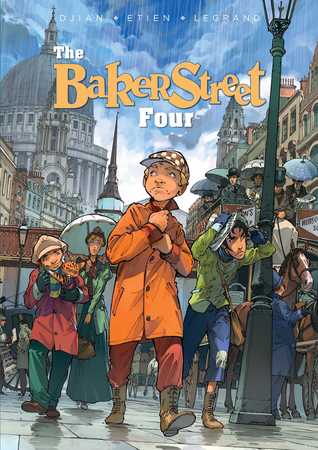 I received a free eARC of this graphic novel from NetGalley in exchange for an honest review.

The Baker Street Four - Billy, Tom, Charlie, and their cat - sometimes act as the eyes and ears of Sherlock Holmes in London's East End and they know they can rely on him for protection; you might know them as the Baker Street Irregulars. When Tom's girlfriend gets kidnapped, they'll have to put their detective skills to the test and along the way take in a new member becoming the youngest group of Victorian detectives.

Sherlock Holmes is one of my all time favorite characters and I have a hard time resisting anything that in some way involves the character. Of course, this graphic novel focuses on the Baker Street Irregulars and we get an inside look at what they do for Holmes and just how dangerous their lives can be. I've always wanted a greater look at these street urchins from what we've seen of them in the original stories and the adaptations, and this does a wonderful job showing what's on the line. I particularly enjoyed getting to know the Irregulars and their interactions with Holmes - and seeing this Victorian London in graphic novel form. The art, by the way, is excellent - the color palette really suits the story.

This graphic novel's easily a four star read, but my experience reading the eARC, or at least trying to figure out how I'm supposed to read it, made me lower my rating to just three stars. I don't know if it was just me, but it was difficult to enjoy a graphic novel when none of the words are in the right spots. All of the text is below each page worth of illustration, so at times it could be difficult to figure out what parts went in each bubble. That being said it could make it difficult to keep track of who exactly is speaking. Another issue, I went in thinking this would be a graphic novel marketed more toward MG audiences, but just to let you know some of the language and subject gets a bit iffy for that age group and at times this could easily fit the YA categorization.

Overall, if you're a fan of any incarnation of the character of Sherlock Holmes, this graphic novel is must read. It's all the better if you want to see Holmes from another fresh perspective. I'm definitely interested in continuing this series (and seeing a finished copy to sort out exactly what dialogue goes with where) in the future.

Thanks again to NetGalley for providing me with this eARC of The Baker Street Four by Oliver Legrand and J.B. Djian.