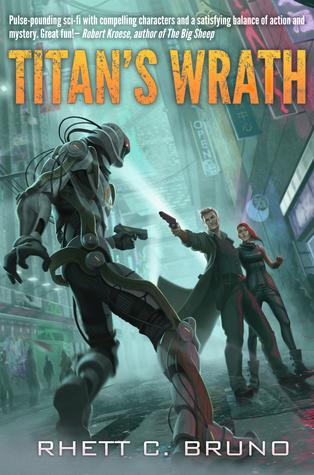 I received a free ARC of this novel in exchange for an honest review.

Keeping control of people requires a different set of skills than does inciting a rebellion against Earth throughout Titan's off-world colonies.  It's not all about fighting as Kale Trass finds out.  After a key battle, Kale moves deep into enemy territory "seeking peace", but peace is far from his mind.  Malcolm Graves used to be a retired Collector, but following Kale's wake of destruction he finds himself ready to jump back into a fight he left behind him.  The solar system is divided and heroes are hard to come by, but someone is going to have to put Kale Trass back in his proper place.

I'm glad to be back for my third Rhett C. Bruno novel - they just keep getting better and better!  Titan's Wrath is a stand alone sci-fi epic set in Bruno's Titanborn Universe.  While this novel is technically the third and final book set in that universe, you don't need to have read any of the others to follow this novel.  I will say though that already being familiar to with From Ice to Ashes, Bruno's previous Titanborn novel, is certainly a bonus.  There's only one novel in this group that I haven't tried yet, and that's Titanborn itself - I definitely want to see how it all ties together and I'd like to see more of Malcolm Graves, one of the major characters here.  Like before, the action, world-building, and complex characters are excellent.  So much happens in this novel's four hundred pages!  I particularly enjoyed the fact that all of the characters are multilayered and that all of them fall into a gray area, the level of description detail, the political intrigue, and, of course, the action.  Plus, I think this one has the coolest cover of all of his novels.

Overall, I highly recommend Rhett C. Bruno's Titanborn Universe.  There's so much to enjoy about these stand alone books set in the same universe.  He has done a marvelous job of making each engaging on its own terms, but it's even better if as a reader you can tie them all together.  I will definitely be following Bruno's future projects, and I still hope to read Titanborn as well.