I'm very excited to welcome you all to my leg of Steadfast (Birth of Saints #3) by Michelle Hauck blog tour, hosted by Rockstar Book Tours!  Today, you'll find the details and summary for this novel, an exclusive excerpt, an about the author, Michelle Hauck, a giveaway, and the blog tour schedule.  Thanks for visiting my stop on the Steadfast blog tour! 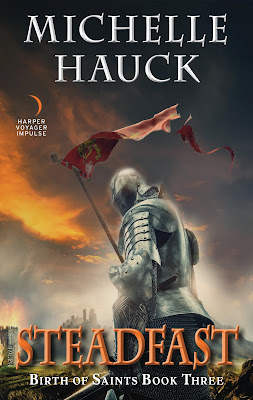 The final novel in Michelle Hauck's Birth of Saints trilogy, Steadfast follows Grudging and Faithful in telling the fateful story of Claire and Ramiro and their battle against a god that hungers for blood.

When the Northerners invaded, the ciudades-estado knew they faced a powerful army. But what they didn’t expect was the deadly magic that was also brought to the desert: the white-robed priests with their lethal Diviners, and the evil god, Dal. Cities have burned, armies have been decimated, and entire populaces have been sacrificed in the Sun God’s name, and it looks as if nothing can prevent the devastation.

But there are still those with hope.

Claire, a Woman of the Song, has already brought considerable magic of her own to fight the Children of Dal, and Ramiro, a soldier who has forsaken his vows to Colina Hermosa’s cavalry in order to stand by her side, has killed and bled for their cause. Separated after the last battle, they move forward with the hope that the saints will hear their prayers, their families will be saved, and that they’ll see each other once more.

A stirring conclusion to the Birth of Saints series, Ramiro and Claire’s journey finds completion in a battle between evil and love.

“I can’t. It’s too late. She’s dead. I was too slow.” Claire reached for his hand—strange as he was, the boy was her responsibility now, her only kin—but he pulled on her. Confused, she resisted. He only tugged harder, drawing Claire away from Jorga and to the pile of supplies Ramiro had left near her horse.

“Help Momma,” Errol insisted, bending to roll a saddle bag at her. His eyes focused on her shoulder, demanding, hopeful.

He pulled at the leather straps holding the bag shut and upended it, giving it a flick to send the contents spilling across the ground. “Help Momma!” The red Diviner lay in the midst of shirts and coils of rope. A slender staff about as thick as a man’s thumb and the length of a forearm. “Hurry!” Errol said, pointing to the weapon.

Claire’s stomach revolted and she stepped back. By the Song! What was she to do with that? It was a Northern weapon for killing, usually carried by their priests.

Her uncle was at her side in an instant, seizing her arm again and dragging her down, closer to the weapon. Errol was bigger, stronger, for all his child-like mind. Trying to pull away got her nowhere.

“Help Momma!” For the first time since they met, his eyes landed squarely on hers—not over her shoulder, not directed at her torso or chin, but making contact. They expressed utter confidence and belief in her ability to help.

This killing device could help her grandmother?

Errol nodded as if he saw into her mind. The muddled blue of his eyes was the same color as Claire’s mother’s had been.

She closed her eyes and held her breath and reached out, taking the deadly weapon gingerly in her hand. She stood slowly—the terrible thing stretched out from her body as if distance could keep something bad from occurring.

Errol danced ahead of her, back to Jorga, watching her expectantly. Reluctantly, she followed as he pointed to Jorga’s prone body. “Help Momma now. Hurry.” His gestures made it plain what he expected her to do.

Claire gathered her courage and touched the blood-red stick to her grandmother’s cooling flesh. The moment of contact felt like a lightning bolt went off in her hand. Electric shock traveled up her arm and down her legs. Her hair stood on end, lifting from her head. Her fingers, instead of loosening, clamped tighter on the Diviner, beyond her control. She screamed at the pain curling her muscles and cooking her flesh. 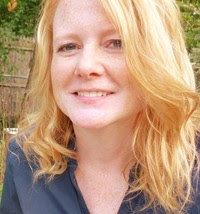 Michelle Hauck lives in the bustling metropolis of northern Indiana with her hubby and two teenagers. Two papillons help balance out the teenage drama. Besides working with special needs children by day, she writes all sorts of fantasy, giving her imagination free range. A book worm, she passes up the darker vices in favor of chocolate and looks for any excuse to reward herself. Bio finished? Time for a sweet snack.

She is a co-host of the yearly contests Query Kombat and Nightmare on Query Street, and Sun versus Snow.

Her epic fantasy, Kindar's Cure, is published by Divertir Publishing. Her short story, Frost and Fog, is published by The Elephant's Bookshelf Press in their anthology, Summer's Double Edge. She's repped by Sarah Negovetich of Corvisiero Literary.

2 winners will receive paperbacks of the first two books in the series, GRUDGING & FAITHFUL, US Only.