Welcome to my sign up post for the 2018 Make Me Read It Readathon, hosted by Ely @ Of Wonderland and Val @ The Innocent Smiley.  I took part in this readathon for the first time last year and I enjoyed the challenge so much that I just had to come back this year.  It begins midnight wherever you are on August 6th and goes through to August 13th.


Look at the books you own, either physical, e-book or ones you've borrowed from the library and pick out a few you really want to read, or feel like you should read. It’s up to you how many you pick, personally I'd pick a few more than you expect to be able to read in a week. Example: if you think you’ll only read two, pick out five books or if you think you can read seven, pick out ten.

Make a list of these books on your blog, or make a video, or a Goodreads shelf or post a picture on Instagram—whatever is easiest for you. Then get friends, other bloggers/ booktubers/ bookstagrammers etc. to vote on which books you HAVE to read.

When the readathon comes along, you read the books in the order of most votes. For example, if one book gets 10 votes—you read that first, then the one that got 7 and so on. If there's a tie, then it's your preference. The goal is to read as many as possible. 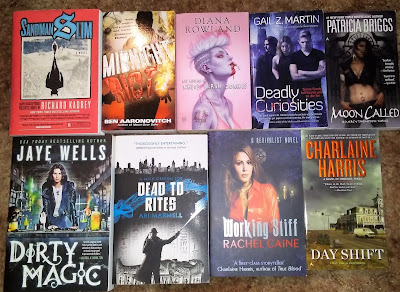 The books I'm hoping to tackle this time around are all urban fantasy and most of them have been on my tbr for a little while now.  My fingers are crossed that I'll check many of them off my tbr!

Sandman Slim (Sandman Slim #1) by Richard Kadrey - All I needed to here that this is for fans of H.P. Lovecraft, Christopher Moore, and Jim Butcher - that sounds like a great combination to me.

Midnight Riot (Peter Grant #1) by Ben Aaronovitch - This is also called Rivers of London and features a cop with London's Metropolitan Police who can speak with the lingering dead and crimes involving magic and manifestations of the uncanny.

Deadly Curiosities (Deadly Curiosities #1) by Gail Z. Martin - I've been hoping to get to this author for awhile - and plus that cover has been done by Chris McGrath who is one of my favorites.  I mean, the figure on the left side is totally Cal Leandros from Moonshine!

Moon Called (Mercy Thompson #1) by Patricia Briggs - I've heard so many fantastic things about this series and I'm excited to start a new series featuring a coyote shapeshifter at the center.

Dirty Magic (Prospero's War #1) by Jaye Wells - A cop with magic powers, illegal street magic, and a Magic Enforcement Agency?  Sign me up!

Dead to Rites (Mick Oberon #3) by Ari Marmell - I haven't read any of the previous books in the series yet, but this sounds really cool.  Noir urban fantasy with a fae private eye?  Yes, please!

Working Stiff (Revivalist #1) by Rachel Caine - I love Caine's YA Great Library series and I'd like to try this series that sounds like it's for fans of Pushing Daisies and iZombie.

Day Shift (Midnight, Texas #2) by Charlaine Harris - I am hooked on the NBC tv adaptation called Midnight, Texas and while I wasn't quite as enthralled by book one in the series I can't wait to get back into the world before the tv series comes back for season two on October 26th.

Now it's your turn to decide what I'll be reading and in what order, so let's get to the poll!


What Should I Read Next?
Created with PollMaker


Thanks for voting everyone!  I'm looking forward to seeing what I'll be reading during the readathon!  As always thanks for visiting my blog!