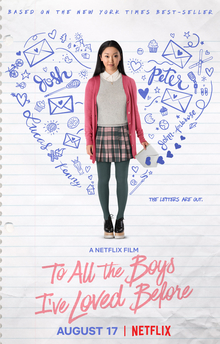 I didn't expect to fall in love with the movie adaptation of To All the Boys I've Loved Before as much as I did. The original novel isn't one of my favorites, but the trailer for the movie adaptation reeled me in (and I'm not even that into romantic comedies). Actually, I think I prefer how it translated to screen - the movie really worked for me in the end. It's totally crush worthy - you can't resist the characters and their relationships (fake boyfriend/ girlfriend, best friends, and family alike). Lana Condor does a fantastic job of carrying the movie as Lara Jean - it's so easy to relate to her character and I loved getting to know the rest of her family and friends. Yes, the fake relationship bit with Peter is fairly predictable, but it's fun seeing Condor and Noah Centineo bring it to life. It's Lara Jean's story, but I particularly liked that Peter is well-fleshed out. At first you expect he's just going to be an irritating jock, but the more you get to know him, you see that the character is much more kind than you first expected. Even though there are some bumps along the way with family, friends, and classmates (and that pesky fake relationship), I was behind them the whole way.

Overall, the groundbreaking movie adaptation of To All The Boys I've Loved Before is a fantastically bubbly teen romantic comedy and a great coming-of-age story that I thoroughly enjoyed more than I initially expected. The casting for this film was done right - it's difficult to imagine anyone else playing these roles now because they are the real heart of the story. By the way, I love the references from The Golden Girls, Sixteen Candles, James Dean, and to Fight Club. Finally, I have to say that I'm hoping Hollywood, Netflix, and the like will take note and bring more diverse YA stories to life, romance or not. And on that note, I'm really looking forward to seeing Crazy Rich Asians on the big screen on my next day off.

I watched this Netflix movie on August 17, 2018 and my review is also on Letterboxd.