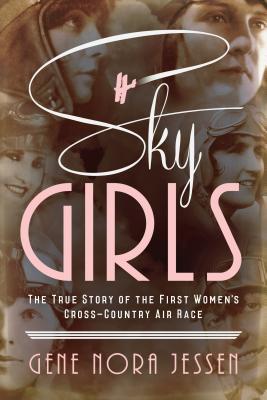 The year is 1929, and on the eve of America's Great Depression, nineteen gutsy and passionate pilots soared above the glass ceiling in the very first female cross-country air race. Armed with grit and determination, they crossed thousands of miles in propeller-driven airplanes to defy the naysayers who would say it cannot - not should not - be done. From the indomitable Pancho Barnes to the infamous Amelia Earhart, Sky Girls chronicles a defining and previously forgotten moment when some of the first women pilots took their rightful place in the open skies. For a country on the brink of defining change, they would become symbols of hope, daring, and the unstoppable American spirit. And for generations to come, their actions would pave the way for others to step into the brave unknown and learn to fly.

Sky Girls is a reprint of the 2002 release The Powder Puff Derby of 1929: The First All Women's Transcontinental Air Race. Early aviation has always interested me, especially when it comes to women pioneers in the field. This history book is a decent entry to get you get interested in the topic. It covers the entire length of the race from California to Ohio and gives us a taste of the pilots involved including Amelia Earhart. Personally, I wish the author's narrative followed a few of the pilots more closely rather than jumping around between the entire group of racers involved. There are also a lot of photos and maps included (or at least there are supposed to be since the ARC mostly just had blank spaces representing where those are supposed to appear in the final copy which definitely made me feel a little out of the loop). Overall, my favorite aspect of this book is that at the end it features more in-depth profiles on all of the racers by concisely going beyond the narrow scope of the race. I also liked the fact that the author, a pilot herself, also goes a little further in the history of female aviation pioneers by touching on their involvement in WWII, commercial airlines, and space. By the way, she even features a profile of Jerrie Mock, the first woman to fly solo around the world in 1964 completing Amelia Earhart's goal. She was awarded the Federal Aviation Agency Gold Medal by President Johnson for her achievements. Even cooler yet, she was a local central Ohioan from Newark.

I read this history book from August 8 - 10, 2018 and my review is also on Goodreads.  Sky Girls: The True Story of the First Women's Cross-Country Air Race will be released on August 18th, 2018.