Happy Wednesday everyone!  Today I'm sharing two ARC mini reviews (I received the ARCs from NetGalley in exchange for honest reviews): Open Mic Night at Westminster Cemetery by Mary Amato & Trapped in Room 217 by Thomas Kingsley Troupe.  Both of these stories will be available on September 1st and both are ghost stories.  Read on to see my thoughts: 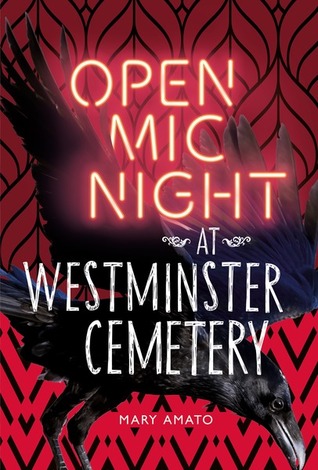 Open Mic Night at Westminster Cemetery by Mary Amato is a YA paranormal fantasy story told in the format of a two-act stage play. If you like a good ghost story, you're going to have to try this tale because there is so much to like about it. It's a darkly humorous and quirky, features a fantastic variety of characters (including Edgar Allan Poe himself), and it asks intriguing questions about life and death. It did leave me wanting a little more, especially about the wider ghostly world though as this is set entirely in one cemetery. The story is very visual and could be fun to actually see as a stage play (or a movie), but I think I would have preferred this to be in regular novel format. I didn't know it wasn't a regular novel before I started reading actually. Personally, I think I was expecting a little bit more Beetlejuice, but overall it would certainly fit in with Tim Burton's oeuvre. 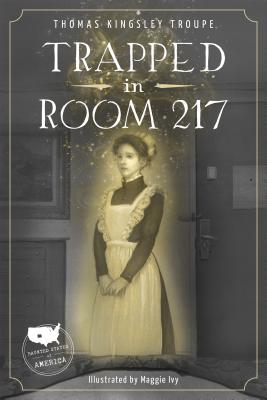 Trapped in Room 217 (Haunted States of America series) by Thomas Kingsley Troupe is a quick, fun, and spooky MG horror story. I love the idea for this series as each story features ghost stories and creepy mysteries from each state. This installment tackles The Stanley Hotel in Estes Park, Colorado which was the inspiration for The Shining by Stephen King. I liked it well enough as we learn about the background of the hotel and get to know the kids at the heart of the story. After all the build up, though, I was just a bit underwhelmed by the ending which didn't quite seem to be on the same level as the rest of it. The story is meant to have illustrations sprinkled throughout, but the ARC just includes a gap for the place they're supposed to be. I wish I could have had the opportunity to see them while reading if they'll be as great as the cover. Finally, I'm think going to have to keep an eye on this series to see where Ohio's installment will be set - my guesses are for the Ohio State Reformatory, the Buxton Inn, the Athens Lunatic Asylum, and the Ceely Rose House at Malabar Farm.