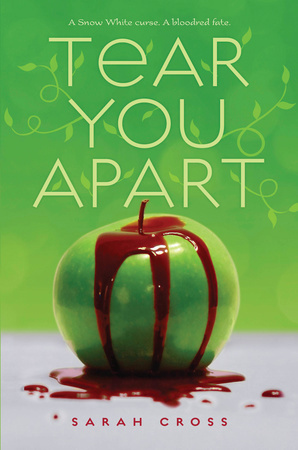 Viv knows she can't escape her Snow White curse. She knows that Regina, her stepmother, will feed her a poison apple or will order Viv's ex-boyfriend, Henley, who plays the role of the Huntsman, to relieve her of her heart. No matter what she does she knows the curse/ destiny will take control of her life. Then, she actually meets her prince. You know, the one she'll have her happily ever after with (if Henley, aka the Huntsman, doesn't cut out her heart for Regina, that is) after he awakens her from her enchanted sleep in the glass coffin. Her Prince, Jasper, shows up a lot earlier than he's supposed to, and offers to protect her from the curse if she will join him and be his queen. Can Viv pull herself away from her destiny, Henley, and Regina, even if they could mean her death?

To begin, I have not read Kill Me Softly, the first book in the Beau Rivage fairy tale retelling series, but based on this you don't really need to read it to get the story. The premise of Tear You Apart intrigued me because it could potentially be a fantastic read alike for Once Upon A Time featuring Snow White, The Evil Queen, and The Huntsman. Unfortunately, Tear You Apart doesn't really deliver.

The main detractor, for me, are the characters. Primarily, my main issue throughout is Viv. Viv is not a likable character. For the majority of the story, she is an annoying, self-centered brat who makes stupid decisions when it comes to guys. I mean, it just doesn't seem smart to constantly treat the guy who could potentially kill you at any moment like crap, does it? Hensley swears he would never hurt her, but his anger management skills leave a lot to be desired. The same goes for her prince, especially when his true nature is revealed. The "romantic" relationships in this story are seriously screwed up and aren't healthy at all (read: it's creepy and abusive love-triangle). I don't want to root for Viv/Henley (What kind of name is that, anyway?) or Viv/Jasper.

In regards to Regina, sure, she is pretty horrible, but honestly I wouldn't blame her for wanting to bump Viv off. It would be a public service. Overall, though, as the Wicked Stepmother/Evil Queen, she's pretty disappointing. I could have done without her flirting with Henley. Again, talk about creepy and uncalled for. Another thing that got to me about her is the name: Regina. She had to get the same name as her Once Upon A Time counterpart? How is that allowed? However, book Regina pales in comparison to tv Regina. On that note, Viv is no Snow - not by a long shot.

It didn't take me long to start rooting for Viv's demise.

I thought there was no way she could come through the story in one piece, but somehow she manages to survive and have a happy ending with her Huntsman. What?!

Overall, I liked the Once Upon A Time-esque concept and the idea of the town itself. Otherwise, the story fell flat in so many ways.

These two will always be my Snow White and Regina:

And, he will always be my Rumpelstiltskin (yes, this character does play a major role in the latter part of the book):