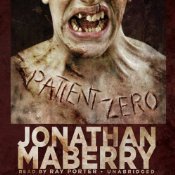 Joe Ledger, a Baltimore detective, has been recruited by a mysterious government agency, the Department of Military Sciences, to lead a task force to deal with things Homeland Security are not equipped to handle. His first mission is to stop a group of terrorists from unleashing a powerful bio-weapon, a plague, that would turn ordinary people into vicious zombies. This plague, if not stopped, would end the world as we know it. Let's just say there's nothing wrong with Ledger's skills when he finds himself killing the same terrorist twice in one week, there's something wrong with the world.

If you like The Walking Dead, either the comics or the tv show, you will love Patient Zero by Jonathan Maberry. This is the first of the Joe Ledger series which is set before Maberry's equally great Benny Imura YA zombie series. This action-packed book takes zombies in a different direction than either of the two mentioned above by showing the how and why behind the monsters. I also wouldn't classify this as solely a zombie story as it's very much a military thriller.

The characters here are fantastic. Joe, our MC, could easily join in the ranks of Rick Grimes, Dean Winchester (minus the supernatural elements, of course), and Jack Bauer. I also enjoyed reading Grace, Rudy, Top, and Bunny. I listened to the audiobook and Ray Porter has a good speaking voice. It was easy to differentiate between the cast of characters. One disappointment in the narration for me was in the presentation of Rudy's voice. He's supposed to sound just like Raul Julia's Gomez Addams, but the sound wasn't quite there. Close, but not quite. Also, I'm not sure if Church is supposed to sound like Tom Hanks, but I will say that Porter can do a great impression of that actor.

The author and narrator, both, do a great job of putting us right down in Ledger's world from beginning to end. The world-building is sound, the action is intense, the characters are well developed, and the topics seem well researched. The zombies are even called Walkers (for pop culture reasons, I presume the characters watch The Walking Dead). And, there's even a Doctor Who reference! I look forward to reading the rest of the series, and continuing with Benny Imura as well. Patient Zero comes with high marks from me.


I listened to the audiobook from February 11 - March 4, 2015 and my review is also on Goodreads.