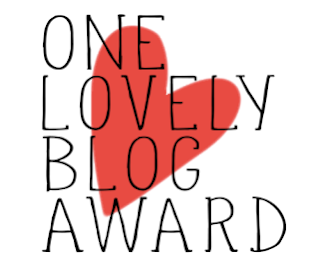 So...Ages ago, Emily @ Ink, Inc. nominated me for the One Lovely Blog Award.  Thanks so much, Emily - if you haven't heard me talk about her blog before, it's one of my favorites!  Anyway, sorry for putting this off for five months, I accidentally forgot about it.  Sorry!

Anyway on to the tag, here are seven facts about me:

1. I got my cat a new scratching post for Christmas and it's quite a bit bigger than his old one and has a couple of added toys to it.  He played with it once before going back and laying on the carpeted based of his old one which I had moved to the other room.  He hasn't even looked at his new one since then... *sigh*

2. I received probably 15 lbs worth of candies, chocolates, and other goodies over the course of the holidays - and I probably polished off 1/3 of it by the day after Christmas.  That can't have been healthy, but it was so delicious!

3. The next two movies I plan on seeing at the movie theater are A Monster Calls (January 6) and The Lego Batman Movie (February 10).  I should probably stock up on tissues for A Monster Calls... if it's as good of an adaptation as it looks like it will be, I'll definitely want to be prepared.

4. I've recently binge-watched two tv shows - both of which turned out to be totally engrossing.  I just recently finished the second season of Peaky Blinders which continued to be awesome and featured some great performances from the returning cast as well as new players (hello, Tom Hardy).

Before that I watched the first season of Mr. Robot, which isn't my normal type of show in the least, but I was hooked right off the bat - Rami Malek gives an excellent performance as Elliot Alderson.  I highly recommend both shows, and I need to get my hands on the next seasons of each show soon!

5. This coming year I plan on participating in Book Riot's Read Harder Challenge which looks like it will be a wonderful way to help myself read more widely and broadly, and force me out of my comfort zone.

6. I managed to get myself on the Blog Tour for The Alchemists of Loom by Elise Kova, hosted by Rockstar Book Tours!  My stop is coming up on January 11th and I'm super excited for it - I've heard so many great things about her Air Awakens series that I just have to try out her writing.

7.  Several favorite tv shows are coming back this January that I can't wait to start watching again - Sherlock (January 1), Shadowhunters (January 2), Grimm (sadly, it's going to be the final season) and Sleepy Hollow (January 6)!


Thanks again for the nomination, Emily!