The Friday 56 (With Book Beginnings): Working With The Devil by Lilith Saintcrow + 50/50 Friday 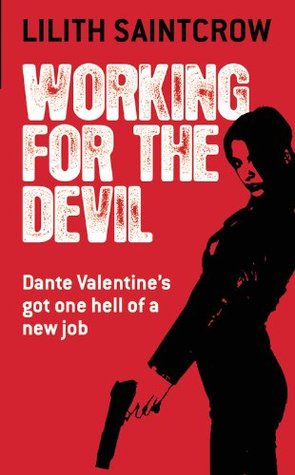 This week I'm spotlighting one of my current reads, Working for the Devil (Dante Valentine #1) by Lilith Saintcrow.  I've been meaning to read more of this author since I tried her YA novel Strange Angels under the name Lili St. Crow.  I'm about 40% of the way through, and I bet that if you like The Dresden Files by Jim Butcher or Supernatural, you'd really get a kick out of this!  So far this is an excellent urban-fantasy with a sci-fi twist.

My working relationship with Lucifer began on a rainy Monday.  I'd just settled down to a long afternoon of watching the holovid soaps and doing a little divination, spreading the cards and runes out on the hank of blue silk I'd laid out, when there was a bashing on my door that shook the walls.

"So what's in the Egg?" I might as well ask him now, I thought, I might not get a chance to later.

"The Prince told you it's none of your concern," Jaf said, staring blankly at the pizza box.  "Is there more?"

"What, three-quarters of a gigantor pie isn't enough for you?" I stared at him.  "Why would breaking the Egg be bad?"

"I've rarely had human food," the demon said, and hunched his shoulders, sinking into the couch.  "Vardimal must not be allowed to break the Egg.  The repercussions would be exceedingly unpleasant."

I blew out a dissatisfied snort.  "Like what?" I asked.  "Hellfire, brimstone, plagues, what?"

"Perhaps.  Or annihilation for your kind," he replied.  "We like humans.  We want them to live - at least most of us do.  Some of us aren't so sure."

This week I'm also taking part in a brand new linkup called 50/50 Friday, which is hosted by Carrie @ The Butterfly Reader and Laura @ Blue Eye Books.  Every week they'll have a new topic featuring two sides of the same coin - this week the topic is Favorite/ least favorite main character.

Hermione Granger from the Harry Potter series by J.K. Rowling - This shouldn't be a huge surprise!

Luce Price from Fallen by Lauren Kate - I could only make it through 2 chapters of this I was so irritated - she came off as far too shallow, self-centered, and a little dumb for my tastes.