From Ice To Ashes by Rhett C. Bruno - Review 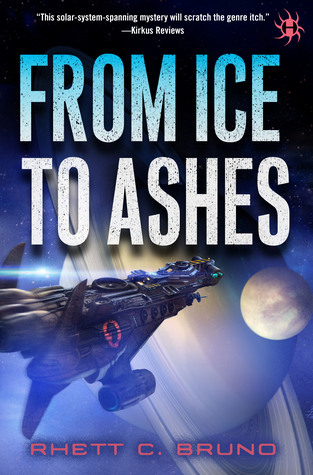 I received this eARC from NetGalley in exchange for an honest review after being approached by the author to review his newest release.

As a Ringer, Kale knows where he belongs and how to keep his mouth shut and his head down, no matter how much abuse he suffers at the hands of the Earthers, or his own people for that matter. He knows he's lucky to only be sentenced to maintenance work on a gas-harvesting ship after getting caught stealing from a rich merchant. Then when he learns that his mother has been quarantined, he knows that his back's to the wall. He'll never be able to pay for her medicine, so he jumps at the chance to take a simple yet mysterious job in exchange for his mother's treatment. The only thing he has to do is upload a program to his employer's ship and all of his trouble will be taken care of. What should be as a simple smuggling gig actually has huge repercussions. The people Kale's working for are much more dangerous than he expected, and he's much more important to them than he could know.

From Ice to Ashes by Rhett C. Bruno starts off with a bang and just speeds up from there. It's set in the same universe as the author's novel, Titanborn, but you don't need to be familiar with that story to fully understand the events of this novel. I'm sure being familiar with that novel would only benefit the reader, but even though I've never read it I never felt lost here. Butler's novel still managed to suck me in right from the very beginning regardless. His writing is compelling and I didn't want to put this book down for a minute. His world-building, character development, and action scenes in particular are all top notch. One thing that really stood out to me from early on are his descriptions of the Ringers (people born on Titan, the colonized moon of Saturn) in comparison to the Earthers. Just that detail really began to set the tone and the atmosphere of the novel for me. I also particularly liked that none of the characters are exclusively good guys or bad guys. Everyone tends to occupy a morally gray area, which is certainly refreshing. The descriptions and action are all quite visual - I could easily picture the events of this sprawling space opera as if they were on the big screen.

Overall, Rhett C. Bruno's newest novel, From Ice to Ashes, is a tightly written and action packed adventure from start to finish. If you're looking for a new space opera to dive into, I have a feeling that you'll like this story whether you've read it's companion, Titanborn or not. You may also like Bruno's style if you are a fan of Neal Stephenson's work. After reading From Ice to Ashes, I definitely want to return to this universe and try Titanborn.

Thanks again to the author and NetGalley for providing this free eARC!