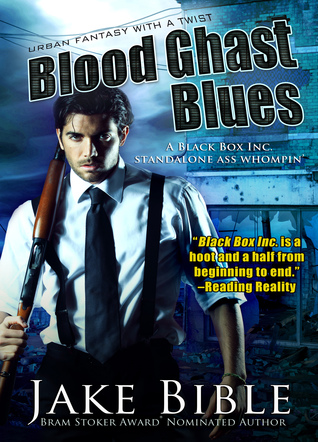 The next victim of gorily destructive demons is the One Guy, a major extradimensional crime lord. If he wants to survive a fate worse than death at their hands, the One Guy will have to go to Black Box Inc. to save him. Chase and his team at Black Box Inc. - Lassa, omnisexual yeti; Harper, an ex-Fae assassin; and Sharon, a business savvy zombie—will have to get the One Guy to Washington, D. C.'s Department of Extradimensional Affairs and get him into protective custody. First they'll just have to keep ahead of the blood ghasts, dimentionalist rednecks, vengeance-seeking kobolds, and his many other enemies, including Chase himself who knows first hand that you can’t trust the One Guy as far as you can throw him.

I was so happy to be approved for the sequel to Black Box Inc. because book one is just so much fun. Luckily, Blood Ghast Blues really lived up to my expectations. Jake Bible's brand of urban fantasy is quite unique as it deals with a wide variety creatures coming into our world via portals from other dimensions. He does a fantastic job writing butt kicking action scenes, cool worldbuilding, and awesome characters and dialogue. As cool as the magic system is in Chase's Asheville, North Carolina, the characters really make this story. I love the team at Black Box Inc. Everyone plays off of each other really well, the dialogue and banter is topnotch, and, even better, each player brings something special to the team. By the way, since I've been watching the tv series Lucifer I can't help but to compare Harper to Maze - and if that alone doesn't want to make you pick up this series I don't know what will. Finally, while technically this is the second book in a series, it is also described as a standalone sequel. You don't necessarily have to have read book one before jumping in here, but it's just all the better to already be familiar with the world and characters.

Blood Ghast Blues (Black Box Inc. #2) by Jake Bible is a fantastic new installment of an epic new urban fantasy series. If you're a fan of Lucifer, The Dresden Files by Jim Butcher, and The Iron Druid Chronicles by Kevin Hearne, I have a feeling you'll want to meet Chase Lawter and his crew at Black Box Inc. Since this is a standalone installment of the series, you don't already need to be familiar with the story before jumping in here. New a fun, fast-paced new urban fantasy series, then look no further. I hope we get to see more of Chase, Lassa, Harper, and Sharon in the future.