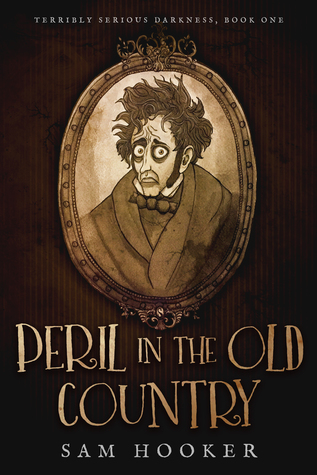 Terrors lurk in the Old Country from goblins, bloodthirsty cannibals from nearby Carpathia, nefarious secret societies, to bloodless murder victims. Then there are the government agencies that might take you in for "questioning" in the middle of the night. Sloot can barely keep himself from drowning in the sense of doom that saturates the Old Country. Any minute could be his last, but now things are looking worse than ever as he's been ordered to correct a ghastly financial statement. It's almost certain that this will lead to Sloot's grisly death, but that probably isn't the worst thing that could happen.

I have a feeling that if you like Terry Pratchett or Douglas Adams, you'll also like the tone and style of Peril in the Old Country by Sam Hooker. I loved the dark, tongue-in-cheek sense of humor. Sloot is something like a mild mannered Arthur Dent sort of character who gets thrown into a whole new world that is nothing like what he's used to. He gets thrown into more and more ridiculous and terrible events and he has to deal with all of these changes to his life now. Unfortunately, the humor doesn't always quite work or flow as well as I would like it to, but the absurdly dark sense of humor is one of my favorite aspects. I also loved some of the ridiculous (in a good way) details that go into the story. I know that this style won't be for everyone, but it's still quite a bit of fun in my opinion. I will definitely want to try the future installments of the Terribly Serious Darkness series.