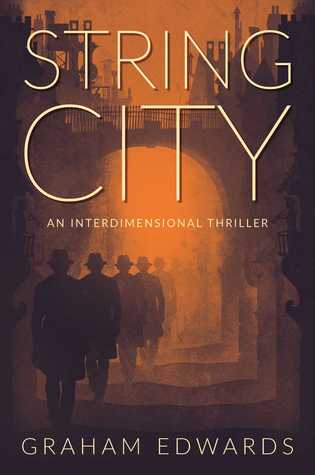 It’s a tough job being a gumshoe in an interdimensional city full of gods, living concepts and weirder things. Good thing I’m a stringwalker, able to jump between realities. It started when I was hired to investigate an explosion at a casino. A simple heist, I thought, but it turned into a race to stop the apocalypse. So I rolled the dice, and now I’m up against the ancient Greek Titans, an interdimensional spider god and a mysterious creature known as the Fool. I’m going to need more than just luck to solve this one. If I fail, all things—in all realities—could be destroyed. Just another day in String City.

String City by Graham Edwards has such a cool premise as a sci-fi, urban fantasy, neo-noir. There's so much to see and the world-building of the titular city is absolutely fantastic. It's incredibly visual and it's easy to imagine everything. I wasn't all that interested in any of the characters, but I did appreciate the main character's dialogue and style. I mean, I can't resist someone who sounds like they'd fit perfectly in a Dashiell Hammett or Raymond Chandler story. Plus, that character also has a versatile coat that I think Kell from A Darker Shade of Magic by V.E. Schwab could really appreciate. This could have been a solidly entertaining four star romp, but unfortunately at times it's disjointed and confusing to keep all of the interdimensional hoping and the like straight.

Overall, String City by Graham Edwards has a lot of potential and is quite unique. Edwards's world-building skills are the standout of the novel. It's a lot of fun to see all of the weird things living together in the city. If you're a fan of The Maltese Falcon by Dashiell Hammett, The Hitchhiker's Guide to the Galaxy by Douglas Adams, and The Dresden Files by Jim Butcher, I expect you'll like this as well.