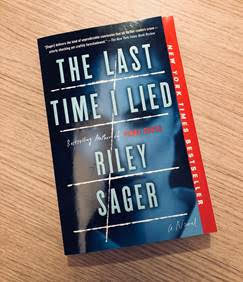 Happy Tuesday everyone!  This morning I'm sharing something a bit different - today is the day The Last Time I Lied by Riley Sager is being released in paperback Dutton Books!  I was offered the chance by the publisher to spotlight this new edition and review a copy of the ARC in exchange for an honest.  I jumped at the chance since I loved his previous release Final Girls and have had this on my TBR since it I first heard about it.  Thanks so much for this opportunity, Dutton!  Keep reading to see the details and summary for The Last Time I Lied, my review, and an about the author, Riley Sager: 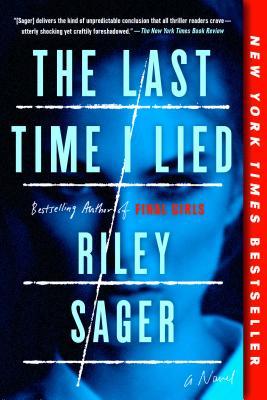 Two Truths and a Lie. The girls played it all the time in their tiny cabin at Camp Nightingale. Vivian, Natalie, Allison, and first-time camper Emma Davis, the youngest of the group. The games ended when Emma sleepily watched the others sneak out of the cabin in the dead of night. The last she--or anyone--saw of them was Vivian closing the cabin door behind her, hushing Emma with a finger pressed to her lips.

Now a rising star in the New York art scene, Emma turns her past into paintings--massive canvases filled with dark leaves and gnarled branches that cover ghostly shapes in white dresses. The paintings catch the attention of Francesca Harris-White, the socialite and wealthy owner of Camp Nightingale. When Francesca implores her to return to the newly reopened camp as a painting instructor, Emma sees an opportunity to try to find out what really happened to her friends.

Yet it's immediately clear that all is not right at Camp Nightingale. Already haunted by memories from fifteen years ago, Emma discovers a security camera pointed directly at her cabin, mounting mistrust from Francesca and, most disturbing of all, cryptic clues Vivian left behind about the camp's twisted origins. As she digs deeper, Emma finds herself sorting through lies from the past while facing threats from both man and nature in the present.

And the closer she gets to the truth about Camp Nightingale, the more she realizes it may come at a deadly price.

I'm so thrilled to have finally have had the opportunity to read The Last Time I Lied by Riley Sager because like I said before I devoured Final Girls.  Luckily for me, Sager's most recent book totally lived up the hype - I actually ended up liking it more than Final Girls which is fantastic since he set the bar so high in that novel!  I have to say I love his brand of dark mystery thriller.  He's brilliant at creating atmosphere and a sense of dread, writing an intriguing cast of characters, and building up a tight central mystery.  I don't want to go into a lot of detail in my review since I don't want to accidentally spoil anything that would be so much more fun for you to uncover on your own.  Once you think you have it all figured out though, Sager's twists and turns will really sneak up on you and you'll be left puzzling out your theories.  Anyway, this novel is a riveting page-turner that will make you want to stay up all night to absolutely devour it whole.  I don't know about you, but I'm dying to see what Riley Sager will pull out of his hat for Lock Every Door which is due out on July 2nd, 2019!

Riley Sager is the award-winning pseudonym of a former journalist, editor and graphic designer who previously published mysteries under his real name.

Now a full-time author, Riley's first thriller, FINAL GIRLS, became a national and international bestseller and was called "the first great thriller of 2017" by Stephen King. Translation rights have been sold in more than two dozen countries and a film version is being developed by Universal Pictures.

Riley's second book, THE LAST TIME I LIED, was published in 2018 and became an instant New York Times bestseller. It was inspired by the classic novel and film "Picnic at Hanging Rock" and one horrible week Riley spent at summer camp when he was ten. A television adaptation is being developed by Amazon Studios.

His next book, LOCK EVERY DOOR, inspired by a lifelong fascination with the grand apartment buildings on Manhattan’s Upper West Side, will be published in July.

A native of Pennsylvania, Riley now lives in Princeton, New Jersey. When he's not writing, he enjoys reading, cooking and going to the movies as much as possible. His favorite film is "Rear Window." Or maybe "Jaws." But probably, if he's being honest, "Mary Poppins."

Have you read anything from Riley Sager?  If not and you're a fan of tight mysteries just oozing with atmosphere and suspense, you absolutely need to try his work.  Thanks again for Dutton Books for making this spotlight possible!