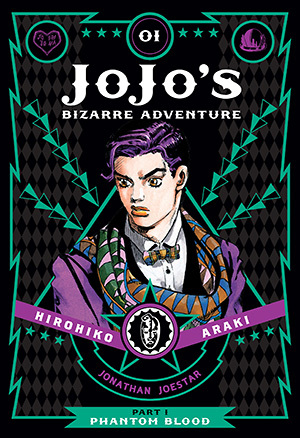 When Dio Brando's father passes away, a nobleman he "saved" years earlier agrees to take in Dio and raise him as his own alongside his own son Jonathan. Dio's father was a real scumbag and the apple didn't fall far from the tree - Dio, if anything, is actually much worse. Dio makes it his life goal to torment Jonathan Joestar, a young man who wants to be a true gentleman, and take his family for everything it's worth. There's also a stone mask that has vampiric qualities that makes the wearer seemingly immortal and incredibly strong.

I'd never heard of this series before I picked it up at the library - mostly because the cover is just so eye-catching and the opening full-color pages are quite intriguing. Since, I've looked it up and learned the series has it's roots in Shonen Jump Magazine and has been around since 1986, this is just the first time it's been translated into English.

So far, I can honestly say that I don't know what to think of it, aside from the fact that it's very bizarre - the title definitely fits the story. It was fun, but it seems a little distant. I've read the extreme origin story for these characters, but I still have a lot of questions - primarily regarding motive. I mean, I understand that the characters are supposed to like an embodiment of good and evil, but it seems forced. Another question, how did twelve year-olds get to be so ridiculously muscular - and that's just in the beginning because after the seven year flash-forward they look like 1980s action stars. I didn't realize they were supposed to be that young in the beginning! Back to the 1980s thing, check out their hairstyles, oh, and one minor character is called Speedwagon. Three guesses where that comes from.

Overall, I liked it, but it everything about it is just so exaggerated and a bit stiff when it shouldn't be. I like manga, but the art here isn't really my style and sometimes it could be difficult to follow some of the action sequences. It was weirdly fun, but I don't know if I'll be coming back for round two.