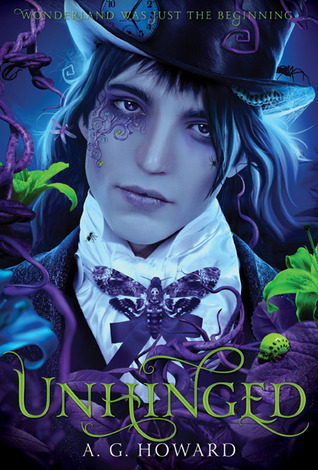 After everything Alyssa faced in Wonderland last year, now all she has to do is graduate from high school, go to prom, and attend the prestigious art school in London with her boyfriend Jeb. However, that's much easier said than done what with her mother being overprotective after her release from the asylum and Morpheus showing up at school to tempt her back to Wonderland with a new challenge. Alyssa has to juggle the real world with trying to tell Jeb the truth about his lost memories. Wonderland is starting to bleed through into her world and Morpheus warns that the Red Queen is close behind. If she stays in the human world, she could endanger everyone she holds dear, but if she goes back to Wonderland, it could cost her much more than her head.

For the most part, Unhinged by A.G. Howard takes what makes Splintered so great and takes it to the next level. This deliciously twisty story is excellently detailed and the creepiness of Alyssa's world is very Tim Burton-esque (read: awesome). In this novel, I loved that Howard brings Wonderland to us, instead of sending us to Wonderland. Of all of the characters in this story, Morpheus is by far my favorite. He's very charming and likable, yet you're never quite sure what to make of him or his agenda. He's a very tricky and slippery character and that translates well to the real world. I also enjoyed seeing more of Alyssa's mother and watching their relationship grow.

There were only three things about this sequel that I disliked or wished were different. The first being the only character I don't care for - Jeb. He may be alright in small doses since he's not badly written, but he appears in so much of this installment that he becomes grating. It's not exactly something I can put my finger on as to why, but his character just rubs me the wrong way. I do know that the amount of time Alyssa spends thinking about Jeb is exhausting. Secondly, as much as I loved seeing Wonderland bleeding over into the real world, I wish we got to spend more time in Wonderland. Lastly, the plot, at times, felt overstuffed with too much going on at once. Usually that doesn't bother me that much, but it actually made things unnecessarily difficult to keep track of while reading.

Overall, I greatly enjoyed A.G. Howard's Unhinged. For the most part, the author was able take the elements that were so great about the first installment and make them better here. However, I'm going to say that at times it suffers a little from second book syndrome - it has a lot of heavy lifting to do and sometimes it just doesn't quite reach the mark. That being said I absolutely can't wait to read the final book, Ensnared! How couldn't I after a cliffhanger like that!