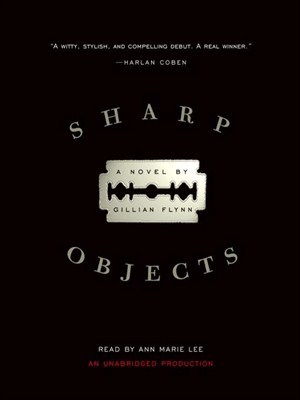 Just out of a psych hospital, Camille's first assignment back at the newspaper is to cover the murder of two preteen girls in her hometown. Since she left eight years ago, she has barely spoken to her mother or the thirteen year-old half-sister she hardly knows. While staying in the family's Victorian mansion, she is haunted by the dark, traumatic past she tried to cut from her life. As she works to find the truth about these murders, she realizes she strongly identifies with the victims. In order to make it beyond all the dead ends, Camille will have to confront the demons of her past if she wants to survive this homecoming.

I listened to the audiobook of Sharp Objects. The performance by Ann Marie Lee is particularly good, particularly her interpretation of Camille and Amma. All of the characters Flynn has created for this psychological thriller are bad people. People you wouldn't want to meet in dark alley, especially the women. That being said, it's fascinating to read these characters and delve into their lives. Wind Gap, Missouri, the setting, was just as fully fleshed out as the cast. It felt like it could have a real small town with lots of local color. This novel is definitely not for the squeamish. I really enjoyed keeping up with the multiple twists and turns - the final reveal is really something else!