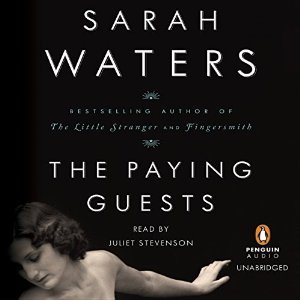 London, 1922. The City is tense - ex-servicemen are disillusioned and many are demanding change. Mrs. Wray and her spinster daughter, Frances, once part of the proud upper class now need to share their stately home and take in lodgers, aka "paying guests". Little do the Wrays know just how much Lilian and Leonard Barber, a young modern couple from the "clerk class", will shake up their lives and how far the repercussions surrounding the relationship formed between Frances and Lilian will travel.

I had only read The Little Stranger by this author and I was so impressed with it that I knew I had to read more by this author. While I wouldn't really compare the two books, both were great in their own ways. Waters excels at creating flawed and complex character who jump off the page, Frances and Lilian are the two I found myself invested in. I liked the slow build of their relationship and exploration of each character separately so we are able to get a very good sense of who they are and how they see themselves. This style also gives the author plenty of time to explore many themes, concepts, and taboos. While this style is great for allowing us so much time with the character, it also dragged in places it shouldn't have.

Another aspect I enjoyed was the Gothic air of mystery surrounding it in the beginning. It really complemented the slow build of the story. Unfortunately, it didn't continue throughout the story. It was dropped right around two-thirds through when it turns into the investigation. It lost that element of mystery and became very predictable. The crime and court case was incredibly predictable - I mean, we know what happened but the professional investigators sure don't. I expect Horatio could have had the mystery solved after a tilt of his head and a bad pun. It was just painful to watch the scenes drag out for the last third of the novel.

Overall, I enjoyed highly character-driven relationship drama of The Paying Guests by Sarah Waters. If you like the author's style, character-driven pieces, and novels set in the aftermath of the Great War, you may want to give it a read.