An Elephant in the Garden by Michael Morpurgo - Review 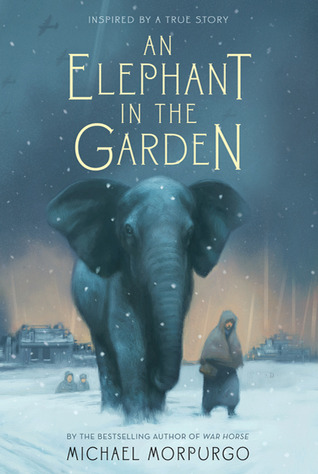 During WWII, Lizzie's mother works as a zookeeper to help provide for her family while her husband is away fighting. Lizzie, her mother, and her younger brother become especially attached to a young orphaned elephant named Marlene. With the bombings of Dresden imminent, the zoo animals are going to be put down as a precautionary measure, but Lizzie's mother gets permission to let the elephant stay in family garden. As the bombs begin to fall, city residents, including Lizzie's family along with Marlene, are forced to flee from the city. As they trek to the safety of an family member's abandoned home, they cross paths with the enemy, a Canadian Royal Air Force Navigator named Peter.

Michael Morpurgo's An Elephant in the Garden was loaned to me by a friend who had just stumbled across it and had nothing but great things to say about it. She had never read anything by this author, like me, but was pleasantly surprised by how much she enjoyed it. I've always been intrigued by this time period and just looked at that cover, not to mention the fascinating summary. I'm glad I took the time to read this novel. It's a beautifully written tale of survival, loss, friendship, and hope featuring nuanced characters. I particularly enjoyed how the author weaves the past and present into the novel as a much older Lizzie tells her story to her caregivers at her nursing home. I fully plan on reading more by Michael Morpugo in the future.


I sped through this novel on September 8, 2015 and my review is also on Goodreads.