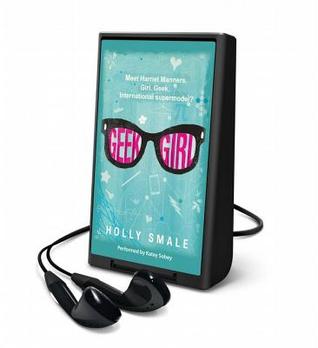 Harriet Manners is a geek - she's overly intellectual, unfashionable, and socially awkward. She only has one real fried, a geeky stalker, and a bully who makes her life miserable. The last thing she expects is to be discovered by a modeling agency while on a school trip. After giving it some thought, Harriet doesn't want to be laughed at any more and she figures that becoming a model will change her life for the better.

Geek Girl by Holly Smale is a refreshingly fun and quirky read. I enjoyed following Harriet's modeling misadventures and seeing how she would attempt to balance her new found career with the rest of her life. Despite everything she still manages to be a very relatable character and someone I'd like to befriend.

I listened to the audio book on Playaway and the production is fantastic. Harriet's voice and tone come through well, alongside characters who aren't so nice. Either way, I greatly enjoyed the first novel of this series and I'm looking forward to continuing it with Model Misfit. If you like Angus, Thongs, and Full-Frontal Snogging (Confessions of Georgia Nicolson series) by Louise Rennison, you'll also like Geek Girl by Holly Smale.