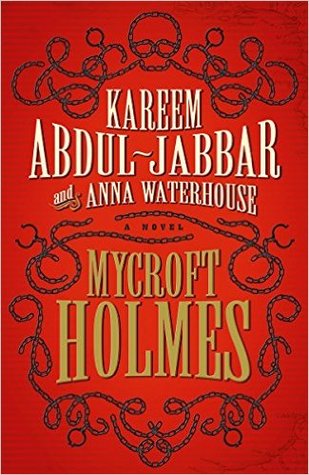 Mycroft Holmes is ready to begin his governmental career after completing his education at Cambridge. Mycroft's comfortable life is turned upside down when his best friend Cyrus Douglas, a man of African descent from Trinidad (also the place where Mycroft's finacee, Georgiana, grew up), receives troubling reports from home about the strange disappearances of children. There are reports of mysterious footprints on the beach and the children found drained of blood. It seems as if spirits are luring children to their deaths. After hearing this news, Georgiana, immediately departs for Trinidad, and in a panic Mycroft and Douglas follow. With each step these two men take, they are drawn further and further into a dark, treacherous web of secrets.

If you haven't already noticed, Sherlock Holmes is one of my favorite characters, so when I saw this novel featuring a young Mycroft advertised on the news it instantly caught my eye. When I realized it was by Kareem Abdul-Jabbar (with Anna Waterhouse), I honestly had no idea what to think. I had never read anything by him before and thought it was highly unlikely that he would write about such characters. I found myself pleasantly surprised, though, because it's so well written, with an intriguing hook, well developed characters, and a great mystery at the center of the story. And, young Sherlock has a cameo. If you enjoy Sherlock Holmes, Mycroft Holmes by Kareem Abdul-Jabbar and Anna Waterhouse is not to be missed.