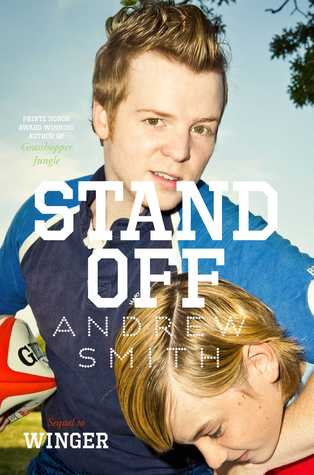 Ryan Dean West is now back for his senior year at Pine Mountain, but instead of focusing on his future all he can think of is his past. The rugby coach expects him to play the position of his lost teammate Joey as fly-half (aka stand-off) and act as team captain, his drawings don't help any more either and he is fully expecting N.A.T.E. (the Next Accidental Terrible Experience) to blindside him at any moment, and to top everything off his new roommate is a twelve-year-old freshman named Sam Abernathy, a cooking whiz with terrible claustrophobia and a crush on Ryan Dean's girlfriend, Annie Altman. When Ryan Dean finally meets Nico, Joey's little brother, it seems like Nico is trying to avoid him, making him more paranoid than ever. How will Ryan Dean make it through his final year at Pine Mountain with his sanity intact?

Winger by Andrew Smith is one of my favorite books, and was easily one of my favorite reads of 2013, so needless to say I was beyond excited to get my hands on the sequel, Stand-Off. To my sheer delight, Stand-Off delivers in every way, and is as good if not better than its predecessor. Ryan Dean West is my favorite character here, and his roommate Sam is a close second followed by Nico (who is decidedly not Joey). Despite everyone's quirks they all seem like they could walk right off the page into the real world. One of my favorite things about this novel is that it can be both laugh-out-loud funny and dead serious while not coming across as forced. Ryan Dean is one of the funniest characters I've read in a long time who also has to deal with the aftermath of the gut-wrenching complications of real-life.

Stand-Off by Andrew Smith is a powerful coming-of-age contemporary YA novel that ranks as one of my favorite reads of this year. If you haven't read Winger and/or its equally amazing sequel, Stand-Off (or anything by Andrew Smith for that matter), what are you waiting for?