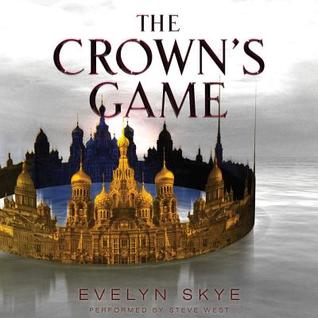 Vika Andreyev and Nikolai Karimov are the only two enchanters currently in Russia and with threats approaching the country from all sides, the Tsar needs a powerful enchanter to serve him. That's where the Crown's Game comes in - it's an ancient duel that tests the skill of an enchanter where the winner becomes the official Imperial Enchanter of Russia and the loser dies. In 1825, the Crown's Game hasn't happened in ages because there's usually only one enchanter of any consequence in the country at a time.

I wanted to like The Crown's Game - I mean, it's YA historical fantasy set in 1825 Russia featuring two competing powerful magicians. Just that was enough to make me want to try Evelyn's Skye's debut. I was expecting a fast-paced, brutal spectacle, where a lot happens, but unfortunately that isn't the case. It takes quite a while to get off the ground and takes it's time, the competition is more of a challenge to see who can impress the Tsar most and not exactly brutal (at least, in a way I was expecting). Plus, considering how long the novel is, not a whole lot happens outside of the competition. Otherwise, though, what we do get is still good, but not nearly as enthralling as I hoped it would be. However, Vika, Nikolai, and Pasha really make the novel. All three are well developed and we get a good sense of them as characters over the course of the story - and the love triangle is actually pretty well done. Also, the magic is quite visually described, but I would have preferred a better explanation of a few elements of the why and how behind it. Otherwise, though, the world-building is good and pretty atmospheric.

Overall, if you enjoyed The Night Circus by Erin Morgenstern and don't mind novels with a slower pacing, you may also enjoy Evelyn Skye's debut novel, The Crown's Game. While I didn't quite love this novel, I am still interested to see how the sequel, The Crown's Fate, turns out.