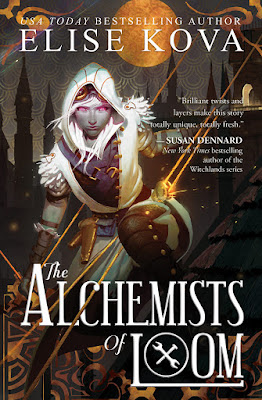 Her vengeance. His vision.

Ari lost everything she once loved when the Five Guilds’ resistance fell to the Dragon King. Now, she uses her unparalleled gift for clockwork machinery in tandem with notoriously unscrupulous morals to contribute to a thriving underground organ market. There isn’t a place on Loom that is secure from the engineer turned thief, and her magical talents are sold to the highest bidder as long as the job defies their Dragon oppressors.

Cvareh would do anything to see his sister usurp the Dragon King and sit on the throne. His family’s house has endured the shame of being the lowest rung in the Dragons’ society for far too long. The Alchemist Guild, down on Loom, may just hold the key to putting his kin in power, if Cvareh can get to them before the Dragon King’s assassins.

He offers her the one thing Ari can’t refuse: A wish of her greatest desire, if she brings him to the Alchemists of Loom.


Praise For THE ALCHEMISTS OF LOOM:

“A heart-stopping adventure! Elise Kova reaches new heights with this fast-paced triumph of steampunk, fantasy, and a touch of romance. The Alchemists of Loom is a must-read!”
– DANIELLE L. JENSEN, USA Today bestselling author of the Malediction Trilogy

“Prepare to have your mind blown. THE ALCHEMISTS OF LOOM is the perfect mashup of genres, with a killer heroine, fiery romance, and friendships that run as deep as blood.”
– LINDSAY CUMMINGS, #1 New York Times bestselling author of Zenith and The Murder Complex

“A new favorite. Kova has created a world of contrasts that I can assure you, is like none you have read before.”
– MEG MCGORRY, N3rdbomber

“Reading THE ALCHEMISTS OF LOOM was like curling up with a favorite fantasy classic. Yet what truly transported me was the brilliant twists and layers that make this story totally unique, totally fresh.” – SUSAN DENNARD, New York Times bestselling author of the Witchlands series

“The Alchemists of Loom is bloody, epic, and brimming with violence. Elise Kova gives fantasy, and steampunk fans, two whole new worlds to delight over as new characters strike out in an adventure sure to leave readers reeling for more. The cast of characters takes readers into a darker realm where no one is pure, everyone has an agenda, and, sometimes, the best friends one can have can be formed between enemies”
– RACHEL E. CARTER, bestselling author of The Black Mage

I've been wanting to try Elise Kova's work since I started seeing Air Awakens around the blogosphere, so when the opportunity came up to review her newest release, The Alchemists of Loom, I jumped at the chance.  Just read the summary and look at that cover (plus, all of that advance praise) - how could anyone resist.  I wasn't one hundred percent sure of what to expect since I hadn't read Ms. Kova's work before, but I was really hyping it up in my mind.  And, happily, it fully lived up to the hype for me!  I found myself fully invested in the world and the cast of characters.

The world and characters of Loom, and Nova, that Elise Kova has created is incredibly rich with a complex history.  It's in the epic fantasy vein, but with a healthy dose of steampunk elements.  The Fenthri of Loom, usually squat in size and ashy in color, don't have magic like their Dragon overlords from the city of Nova above the clouds.  Instead, they engineer and experiment with technology.  The Dragons are seemingly the opposite of their Loom counterparts with their bright colors, lanky frames, and magical abilities.  They, aka the Dragon King, control Loom and have brutally imposed their will on Fenthri society and how their Guilds operate.  They can also fly, but not in they way you would expect.  There are also people called Chimera.  Chimera are Fenthri who have needed to receive Dragon parts, organs, and/ or blood to survive and as a result can access Dragon magic.  Essentially, the citizens of Loom are slaves of the Dragons.

All of that's just a quick overview, but you can see how unique and complicated things are right from the beginning.  Like I mentioned before, I was absolutely taken in by all of this and I couldn't help but want to know more about this unique land.  Of course, it takes a bit to get things straight, but it never becomes overwhelming.  Although, we're set loose in the middle of this place, I found myself fairly quickly able to get my balance.  A good deal of that has to do with the characters populating this realm.

This novel features several perspective characters - mainly Arianna, Florence, and Cvareh - a Chimera, a Fenthri, and a Dragon, respectively.  Each are quite different and we get a very good idea of how the Kova's world works through their interactions - primarily between Arianna and Cvareh.  While Ari hates Dragons, she comes to learn that she and Cvareh have a little more in common than she would have thought possible.  I also particularly liked reading about the friendship between Ari and Florence.  Florence is pretty great, by the way,  she works as a Revolver making weapons for Ari.  Basically, Florence really gets a kick out of blowing things up.

Overall, The Alchemists of Loom by Elise Kova is an amazingly creative and imaginative steampunk fantasy that comes highly recommended from me.  It's fast-paced and action-packed with complex world-building, plenty of magic, and a great central female friendship.  I think you'll also like this novel if you're a fan of Throne of Glass by Sarah J. Maas and A Darker Shade of Magic by V.E. Schwab.  I, for one, can't wait for the sequel, The Dragons of Nova - and I'll need to pick up Air Awakens as soon as possible. 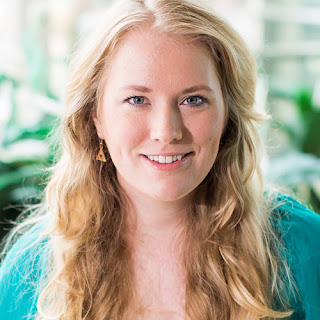 Elise Kova has always had a profound love of fantastical worlds. Somehow, she managed to focus on the real world long enough to graduate with a Master’s in Business Administration before crawling back under her favorite writing blanket to conceptualize her next magic system. She currently lives in St. Petersburg, Florida, and when she is not writing can be found playing video games, watching anime, or talking with readers on social media. She is the USA Today bestselling author of the Air Awakens Series as well as the upcoming Loom Saga (Keymaster, 2017).

1 winner will receive a signed finished copy of THE ALCHEMISTS OF LOOM, International.

3 winner will receive THE ALCHEMISTS OF LOOM Swag Packs, International.