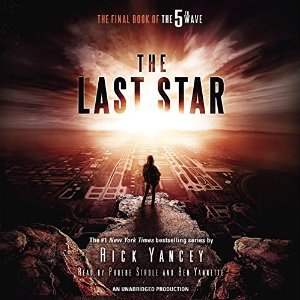 The Others are the enemy, we are the enemy. The Others are everywhere and they are nowhere. They want to take the planet or they want us to keep it. They're here to kill us, but they're here to save us. Riddles are everywhere, but Cassie is sure of one thing - she's been betrayed and so have Ringer, Nugget, and Zombie, plus all other human inhabitants of planet Earth. We have been betrayed by the Others and by ourselves. In our final days, Earth's survivors are going to have to decide what's more important whether that's saving the planet or saving ourselves.

Rick Yancey's The Last Star is the final installment of one of my favorite series, The 5th Wave. While I liked it well enough, it just didn't quite live up to my expectations and it just didn't quite hook me in the way the first two did. My favorite aspect of the finale is easily Ringer's perspective and everything that she goes through as an enhanced human/ alien hybrid. Plus, the action scenes are handled well. However, there are too many point of view characters and not enough focus on anyone in particular. I would have preferred to have seen more from Cassie's and Evan's point of view, like in the beginning of the series. There are so many perspectives that at times it could be difficult to keep track of which one I was listening to since the two narrators weren't the best at differentiating between all of the characters voices. Perhaps I would have preferred reading the novel rather than listening to it on audiobook.

Overall, The Last Star, the grand finale of The 5th Wave series is a let down in comparison to the first two books. For me, it incorporated too many POV characters and the atmosphere that I enjoyed from the earlier ones is lacking. However, this less than stellar conclusion makes me appreciate the first two novels in the trilogy all the more. I am looking forward to seeing what Rick Yancey will write next.