The Friday 56 (With Book Beginnings): The Book Jumper by Mechthild Gläser + 50/50 Friday 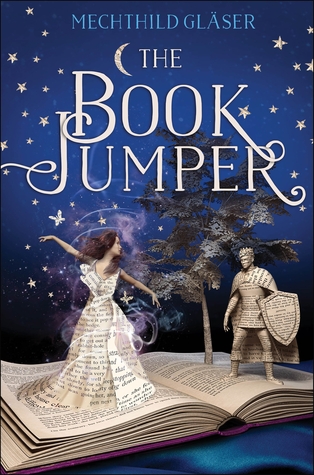 This week I'm spotlighting an upcoming read and one of my most anticipated 2017 releases, The Book Jumper by Mechthild Gläser.  It was originally released in Germany in early 2015 and has been translated into English.  The concept of the story sounds wonderful - the main character is a book jumper which means she can jump into stories and interact with the worlds and characters inside.  That sold me on the book immediately - and then there's the beautiful cover to top it off.

My grandmother stirred a dash of milk into her tea.  "I think that for many years Alexis was in denial about the fact that you might have the gift, too - until she almost came to believe her own self-deception.  She is afraid of what might happen to you in the book world."

"Well - her own experiences as a book jumper were not entirely positive," said my grandmother quietly, as if she didn't want anyone else to hear.

"Do you know the novel Anna Karenina?"

Lady Mairead nodded.  "Alexis chose the story as a practice book and -"

At that moment, Alexis entered the conservatory and Lady Mairead fell silent.

This week I'm also taking part in a brand new linkup called 50/50 Friday, which is hosted by Carrie @ The Butterfly Reader and Laura @ Blue Eye Books.  Every week they'll have a new topic featuring two sides of the same coin - this week the topic is Favorite/ Least favorite spine design.

The Scholastic Harry Potter paperback set - doesn't that look awesome with the Hogwarts castle and everything!

I used to have quite a few used Dover Thrift Editions of classic books for college.  A lot of them were all written in and generally in pretty rough condition.  They weren't exactly ugly, but the covers and book spines weren't inspiring.