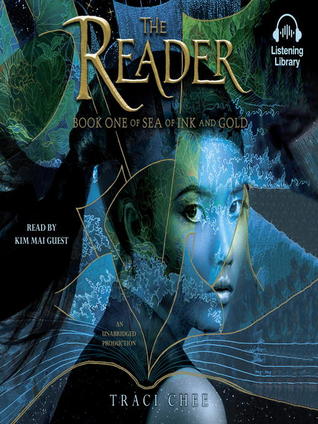 After her father was murdered, Sefia was taught plenty of crucial survival skills by her aunt, but now her aunt has disappeared. Sefia's only clue to her father's murder and aunt's disappearance is this weird object that her father left behind. Eventually, Sefia discovers that the thing is a book, something unheard of in her world, and she'll learn all she can about it to uncover the truth about her father and aunt alongside a dark, mysterious, and silent new ally.

The Reader by Traci Chee is a diverse YA fantasy that ties together storytelling and magic in intriguing ways with beautiful prose that kept my attention. One of my favorite aspects of this novel is just how integral and interconnected the stories from The Book are and how they are presented within Sefia's story. Of our cast, Archer is easily my favorite of the group. He isn't the main protagonist, but I wouldn't say no to a book from his perspective.

I have to admit that I was pretty excited for this book, but ultimately I was let down by it. It just didn't live up to the expectations I had built up for it. It's quite slow and it also has so many POVs to keep track of throughout the novel that it becomes a little confusing. I did listen to this on audio, which may have added to my difficulties in that regard. One key issue that I had a hard time getting past is how Sefia teaches herself how to read - I mean, how can she even begin to know how to start decoding The Book if she had no clue what a book was for her entire life until now, and if her society is primarily illiterate? I know, her skill didn't come from nowhere - the toy blocks - but that still irked me.

Overall, The Reader by Traci Chee has quite a bit going for it like gorgeous storytelling, great characters, magic, and even pirates, but in the end it was a little disappointing. It's definitely worth trying, perhaps in print instead of audio. I am certainly interested in what Traci Chee will do next and where the sequel, The Speaker, will go.