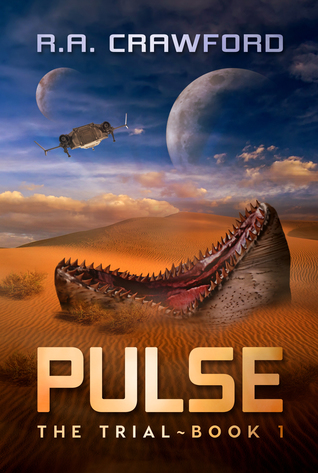 I received a free ecopy of this book from the author in exchange for an honest review.

If you want to be a Soldier of the intergalactic PULSE empire, the Planetary Union of Life-form Salvation and Emancipation, you attend the rigorous and brutal training Academy for eight years from age ten to eighteen. In the final year just before graduation and assignment, all applicants undergo the Trial. Trial survivors graduate and receive their posting, those who don't survive are just a name on a long list of failures. That's the life of a PULSE Soldier - success or death. Faye and Stella are two candidates out of their class of forty-two, and the odds aren't exactly in their favor. Earth is one of the more recent additions to the empire nearly a century ago, and Humans tend to be considered one of the weaker species. The Trial makes no exceptions - to become a PULSE Soldier you have to be the best - and it's known for being incredibly punishing with a low survival rate. The two friends, practically sisters, are going to have to give all they have and even more if they want to see graduation.

I'm so glad I accepted the review copy of The Trial (PULSE #1), R.A. Crawford's debut novel. As soon as I read the summary, I knew I had to try this action-packed sci-fi story featuring an all-female cast. Then I saw the cover which really makes me think of Dune and Tremors, and my mind was made up - I needed to try it. Luckily, the characters and the story reeled me in right off the bat. To describe the cast as simply strong female characters is quite an understatement. We only get to know a good deal about a handful of those undergoing the Trial, but each is well-developed particularly Faye and Stella, who are practically sisters and a real dynamic duo. They do everything together, and they fully plan on making it side-by-side through the Trial to graduation. Aside from them, Miriyada is another favorite - the top student at the Academy, and maybe one of the best Human Academy students of all time - she gets her fair share of epic moments.

The circumstances of the Trial are brutal, intense, bloody, and fast-paced. The cast have no idea what's coming and only minimal instructions. Their goal is to make it across the desert and mountains of an unknown planet to their shuttle home within 72 hours. If they don't make it, they'll be left behind to fend for themselves with no hope of becoming a PULSE Soldier. The odds of even making it a fraction of that distance, though, is pretty slim as Faye and Stella find out. As it turns out, when the transport arrives at the planet where the Trial is taking place the first step involves jumping into the desert below from a great height. Let's just say that a good deal of the class doesn't even make it the surface of the planet alive, or in any condition to continue the Trial. Things turn bloody immediately once the animals native to the planet come out to play. Without getting into spoiler territory, the Huntress makes an awesome (and close to home) adversary.

Overall, The Trial (PULSE #1) by R.A. Crawford is an incredibly visual sci-fi thrill-ride that takes no prisoners. I highly recommend it, especially for fans of The Hunger Games by Suzanne Collins and The Scorch Trials by James Dashner. I am certainly looking forward to future installments of the PULSE series, and more from the author, R.A. Crawford. Thanks again for a great start to my January, R.A.!