The Crowns of Croswald (The Croswald Series #1) by D.E. Night (ARC) - Review 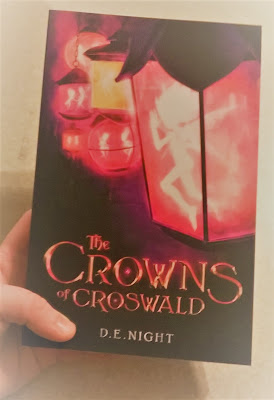 For her entire life, Ivy has lived behind a boundary that separates the mundane world from the magical. It's hidden her effectively up until she crosses that border and her magical powers awaken. She ends up becoming a student at the Halls of Ivy, a school for those who need to master their magic as well as to learn how to use Croswald's gems. After an attack, Ivy quickly has to uncover the mysteries of her past to save herself and Croswald before history is swept away.

The Crowns of Croswald by D.E. Night is the first in a brand new Middle Grade fantasy series that has been compared to some of my all time favorites like Harry Potter and Percy Jackson, along with a dash of Disney's Cinderella. Our sixteen year-old MC, Ivy has lived a life of drudgery as a scaldrony maid at a castle. She only has one real friend who watches out for her, but despite everything she's still brave and curious about the world around her (or at least as much as she can afford to be). Alongside Ivy, I loved seeing the new-to-her magical world come to life as she is invited to attend a school where the students learn their innate magical abilities - and realize just how vital she is to the past and future of the kingdom. While I loved getting to know Ivy, I also found myself interested in the magic of the scrivenists that revolves around quills, ink, and storytelling.

As much as I enjoyed these elements of this story, I did have a few issues with the novel including characterization, world-building, and pacing. As for characterization, I have to mention Ivy's age - we're told over and over again that Ivy is sixteen years old, but on the page she doesn't really sound or feel like a sixteen year old at all. Maybe it's the middle grade classification of the story, but to me (if we weren't told her age so often) would have guessed that she was only eleven or twelve years old - like Harry or Percy are at the beginning of their stories. The world-building that we get is good, but overall it feels a little lackluster as I felt a touch out of the loop when it comes down to some details of the magic system and the background of the kingdom. Finally, I do want to mention the pacing as it does jump around a fair bit from slow with very little actually happening to rushing by. On a similar note, some of the transitions between chapters or sections are a bit jarring.

Overall, The Crowns of Croswald by D.E. Night is a decent debut that is quite addicting and adventurous. While it does have a few small issues, it's still a fun read with a magic system that will definitely appeal to book lovers. If you like Harry Potter, Percy Jackson, Cinderella, and perhaps even Tangled, you may enjoy jumping into the world of Croswald.

Thanks again to JKS Publications and D.E. Night!


I read this ARC from from September 3 - 8, 2017 and my review is also on Goodreads.  You can also check out my unboxing post here.