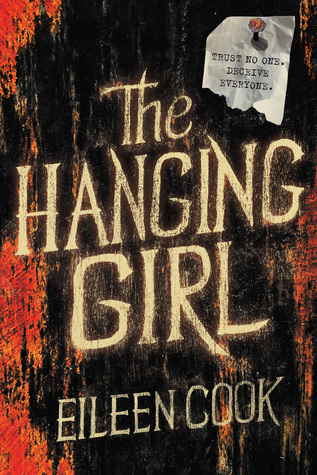 I received this free eARC via NetGalley in exchange for an honest review.

Skye has given tarot card readings and has had psychic visions before, but they've always come easily enough seeing as they've all been faked. Now, though, her "visions" are helping the police find Paige, the missing daughter of a prominent local judge, but this time she has insider knowledge. The kidnapping was supposed to be easy - a harmless prank - that would earn her the money she desperately needs to move to NYC after graduation with her best friend. Things go south as Skye realizes that the people she's involved with are willing to kill to get what they want. She'll have to uncover their true identity before it's too late.

The Hanging Girl is the first novel that I've had the chance to read by Eileen Cook and I'm certainly glad that this novel was my jumping in point to her work. If you love a great YA mystery thriller with an unreliable narrator, I expect you'll really appreciate this story. Let me get this out of the way first: I didn't really like any of the characters presented here. That being said, I was absolutely hooked by by this intense and twisty thriller. I didn't want to look away in case I missed the next turn because just when you think you're starting to get things sorted out - bang - something comes along and totally changes the game.

Skye, our MC, isn't all that likable, but she is still a fascinating character to follow since she is pretty much a compulsive liar. If she thinks she can benefit from a lie, she's spinning stories to get what she needs. She also has a great memory for details and she's great at reading body language and facial expressions. Her mother, to put it lightly, is half out of it and very eccentric. She thoroughly believes in all sorts of spiritual types of things from reading auras to having psychic visions and she definitely doesn't set the best example for her daughter, or provide for her. To say the least, Skye has a crappy home life on top of everything else. The only bright spot in her life is Drew, her best friend, and really her only classmate who has been willing to put up with her. While I appreciated Drew's role, I wish it could have been a bit further beyond what end up getting. As much as I want to talk about some of the big twists, I won't spoil it for those of you that haven't had the opportunity to try this novel. Here's my forewarning: don't let your guard down because you've got some real doozies coming your way!

Overall, The Hanging Girl by Eileen Cook is a new YA mystery thriller that is a roller coaster of twists and turns. If like me you have a soft spot for unreliable narrators and are looking for a YA Gone Girl-esque read, you need to try this novel and meet Skye. I will definitely be bumping Eileen Cook's 2016 release, With Malice, up my TBR list.