Every Day by David Levithan - Review 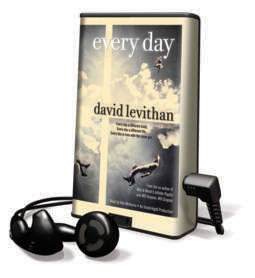 Every day A wakes up in a different body, different life. There's no warning as to who and where A will wake up. A has made peace with that because there's nothing he can do to change it and he has no answers as to why it happens. A tries not to interfere in the lives he shares which means not getting noticed and to never get too attached to his many "families" and "friends". This is all well and good until he wakes up as Justin, the boyfriend of Rhiannon. A realizes he wants to spend the rest of his life, every day, with Rhiannon. A takes a big chance and tells Rhiannon his story and hopes she will believe him and hopes for a future relationship between them.

David Levithan is a captivating storyteller when it comes to complex and unique contemporary YA. He raises many excellent questions about (same)love, self-identity, masculinity and femininity, and use of personal pronouns. We are also treated to a diverse cast (partly due to the nature of A).

A's story is beautiful and transformative, but I found myself wishing to know more about the technical details of A's life. I really wanted to know the specifics on the how and the why aspects of the character. I found it hard to accept that A just didn't really question it and had made peace with what happens to him every single day. I mean, what is he, how is it possible, are there more people like him, what exactly happens to the people he inhabits before, during, and after, and why doesn't he seem to wake up in other countries? The entire bit with Nathan and the preacher, especially, could have gone much further into this territory with the "you are not alone" aspect.

Also I found myself upset and not in the tugging on the heart-strings way, but more in the "are you kidding me?!" way at how (view spoiler)[A sets up Rhiannon with the guy he's possessing or inhabiting or whatever. I was kind of disturbed that he just wouldn't let her move on in her own way in her own time. (hide spoiler)] Maybe that was just me, though.

Overall, I fell in love with this David Levithan's storytelling skills all over again in Every Day, even though there were so many aspects I would have loved to explore regarding A.