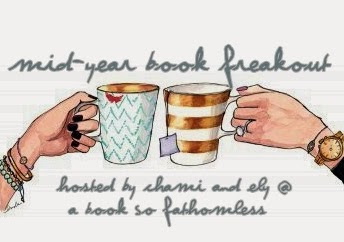 I've noticed some of my favorite book bloggers are participating in the 2014 Mid-Year Book Freakout survey and although it's past mid-year now I'd still like to throw in my two cents.  So here we go - on to the survey!

It's hard for me to choose just one, but I can narrow it down to these: All Our Yesterdays by Cristin Terrill, Blood Red Road by Moira Young, Code Name Verity by Elizabeth Wein, These Broken Stars by Amie Kaufman and Meagan Spooner, Half Bad by Sally Green, Peter and the Starcatchers by Dave Barry and Ridley Pearson, and Doubt by Anne-Rae Vasquez.

Downfall by Rob Thurman - I love the Cal Leandros series!

Shatter Me by Tahereh Mafi, Fallen by Lauren Kate, The 100 by Kass Morgan, Frog Music by Emma Donoghue, Northanger Abbey by Val McDermid, and Specials (Uglies #3) by Scott Westerfeld. (I don't even want to talk about the fourth and final book in that series...)

I was most surprised by how much I fell in love with Fangirl by Rainbow Rowell.

7. Favourite new author. (Debut or new to you)

Most recently? Then that would be A Monster Calls by Patrick Ness.

All Our Yesterdays by Cristin Terrill, the first three books (the ones I've read so far) of The Iron Druid Chronicles by Kevin Hearne, and Doctor Who: Summer Falls and Other Stories by James Goss, Melody Malone, and Justin Richards.

12. Favourite book to film adaptation you saw this year.

Divergent and The Fault in Our Stars were both very good - we'll see what I say after Gone Girl and The Maze Runner are released!
13. Favourite review you've written this year.

All Our Yesterdays, City of Heavenly Fire, If I Stay by Gayle Forman, Hounded (The Iron Druid Chronicles #1 - and #2 & #3) by Kevin Hearne, and Jeeves and the Wedding Bells by Sebastian Faulks (I was able to use some nice Jeeves and Wooster gifs in this one!)

14. Most beautiful book you've bought so far this year (or received)

These Broken Stars, Alienated by Melissa Landers, and Renegade by J. A. Souders

15. What books do you need to read by the end of the year?