The Liebster Award is a tag meant to spread the word about about great blogs.  Here are the rules:

2. Answer the 11 questions your nominator gives you.

4. Ask the 11 bloggers you have nominated 11 questions and let them know you nominated them.


My thanks go out to Brittany from Space Between the Spines for nominating me - don't forget to stop by her blog!

Here are the bloggers I nominate for the Liebster Award:

1. Tanya at A Book Paradise
2. Ashley at Books to the Tea
3. Emily at Emily Etc.
4. Marie at Marie Loves Books
5. Saloni at My Fantabulous Bookshelf
6. Patty at Patty's Book Corner
7. Jillyn at Bitches n Prose
8. Ellen at Random Smiles
9. Jessica at The Psychotic Nerd
10. Sarah at Total Teen Fiction
11. Larry at It's Either Sadness or Euphoria...

The following are my answers to Brittany's questions.

1. If you could date one character from a book, who would it be and why?

I'm going to use my answer from my Mid-Year Book Freakout and go with Atticus O'Sullivan from The Iron Druid Chronicles by Kevin Hearne.

2. You're stranded on a desert island and are only given three books for entertainment.  What are they?

The Harry Potter series by J. K. Rowling, the Lord of the Rings by J. R.R. Tolkien, and the Dresden Files by Jim Butcher (Does that count? :) )

3. What is your favorite movie adaptation of a book?

There are so many but I can't get enough of the Harry Potter and Lord of the Rings movies (plus what has been released of The Hobbit so far), I also love To Kill a Mockingbird, and the 1951 version of A Christmas Carol with Alastair Sim as Scrooge.

4. What was your favorite children's book?

When I was little I was completely obsessed with Corduroy by Don Freeman. 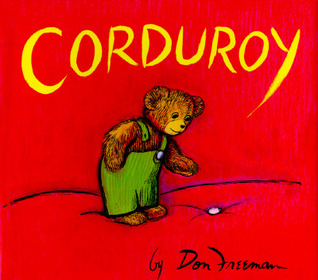 5. What is one genre you usually don't read but have enjoyed in the past?

I'm going to go with romance on this one.  I'm okay with the genre if it's used in conjunction with something else and used relatively sparingly and without to much sap.  Then again there are stories I have enjoyed that are more primarily romance, like The Fault In Our Stars by John Green.

6. What is your favorite classic book?

It's always hard for me to narrow it down to just one so here are a few: To Kill a Mockingbird by Harper Lee, The Hitchhikers Guide to the Galaxy  by Douglas Adams, The Great Gatsby by F. Scott Fitzgerald, Dracula by Bram Stoker, Frankenstein by Mary Shelley, The Complete Sherlock Holmes by Arthur Conan Doyle, and Wuthering Heights by Emily Bronte (never been a decent movie adaptation in my opinion).

7. If you could have one book that releases in the next year early, which would it be?

8. What was one book series that left you disappointed?

I loved the way the Uglies series by Scott Westerfeld began, but I was really disappointed by Specials (Uglies #3) and I don't even want to talk about the completely unnecessary fourth installment.

10. What's a book that you love, but no one else really knows about?

Doubt by Anne-Rae Vasquez, The Elect by Elle Todd, and Through Wolf's Eyes by Jane Lindskold - all of these series openers need more love!

11. [Here I've been asked to spread the blogging love by visiting three of my fellow nominees' blogs, following them, and leave one comment on each.]

I followed and commented on posts from sleeps with notebooks, Time Turning Reads, and A Perfection Called Books!