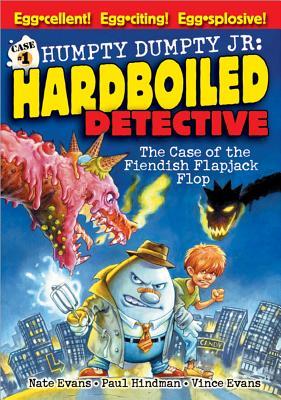 Humpty Dumpty Jr. is the best hard-boiled egg for the case. He always catches the bad guy...except once when things got too personal with his dad. Now, a frantic call for help tells him that someone is making it personal again. And this time, Humpty better watch out before he gets scrambled.

I stumbled upon this awesome chapter-book series for young readers at my local Goodwill store. Needless to say, I fell in love with this pun-tastic fairy tale noir mystery. I've always enjoyed a good hard-boiled crime mystery and I'm a sucker for a good fairy tale. I wasn't sure if it would work, but it turns out it's a pretty great combination of both worlds. I could easily hear all of the characters presented in these pages speaking inside my head and see them in gritty black and white.

I highly recommend this "Egg-cellent! Egg-citing! [and] Egg-splosive!" chapter book! If you have an interest in film noir, hard-boiled crime fiction, or fairy tales, you should not miss Humpty Dumpty Jr's first case, The Case of the Fiendish Flapjack Flop! 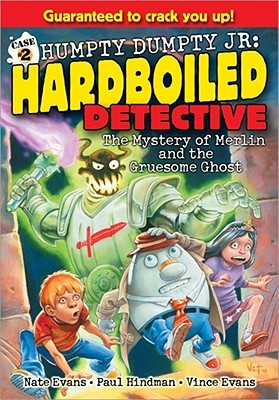 In this second and, unfortunately, final installment of Humpty Dumpty Jr.: Hardboiled Detective entitled The Mystery of Merlin and the Gruesome Ghost, Humpty's sidekick, Rat, has to go to school. He doesn't want to until he learns he may be King Arthur reborn and gets invited to study at Merlin's Institute for the Knowledge of Everything. Princess Lily, Rat's new friend, tells them that a magic eating ghost is haunting the school. Can the three friends banish this ghost and learn the truth about Rat?

Just like it's predecessor, I also picked up this cool little chapter-book from my local Goodwill store. I really enjoyed the addition of Arthurian legend to this fairy tale noir. Somehow, all of the elements come together in a fantastic way in this super fun, pun-filled tale.

This hilarious chapter-book comes with high praise from me! According to my copy, there should have been a third case (starring a ninja!) released in May 2009, but unfortunately it looks like it never happened. Regardless, I'm glad I got to know Humpty Dumpty Jr.!