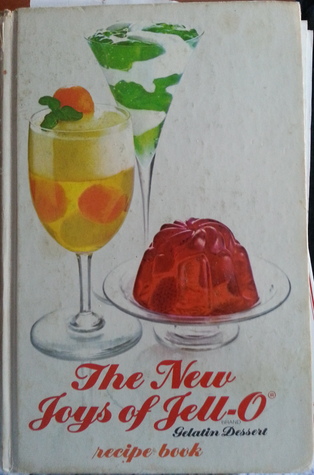 So, Mom got me this for Christmas! Weirdly, I kind of like looking at strange old cookbooks - it seems like whenever I go to an antique shop I see cookbooks using either Jell-O or bananas (banana meat loaf, anyone?). I cannot believe that these were as actually popular, or, even edible for that matter. This is one of the newest (1974) I've seen for a Jell-O cookbook - I've seen some real doozies from the 1950-60s!

A few of the recipes in here aren't bad, like Jell-O cubes or Jell-O with fruit. Those are standard Jell-O fare, right? Some of these I may just try. Well, it's when you start adding mayo, sour cream, olives, tuna, pickles, tomatoes, chicken, shrimp, turkey, and assorted vegetables to that Jell-O that things start to get downright weird and disgusting. In the future, I may actually try to make one of those just to see if they are as bad as they sound. For example, "Chicken Mousse", "Molded Ham and Egg Salad", "Creamy Bleu Cheese Salad", "Green Goddess Salad Bowl", "Molded Tomato Relish", or "Salmon Dill Mousse" all sound positively stomach-churning. Seriously, who was paid to come up with recipes like these?!

I think "Chicken Mousse" takes first place most disgusting. What do you think?

With the "Molded Ham and Egg Salad" coming in a close second:

I enjoyed looking at the normal and ridiculous recipes as well as the incredibly 1970s-looking pictures of friends and families having brightly colored Jell-O parties.

The only reason I'm giving this four stars rather than five is the fact that not every recipe has an accompanying picture and that I did feel a bit nauseous while reading some of those wild recipes.

Is it just me or does a dessert called the "Richelieu Mold" sound like some kind of torture device? Actually, this isn't one of the weird ones, the ingredients sound fairly normal. Most of the other recipes, however, could be, or, at least come directly from your worst nightmares.