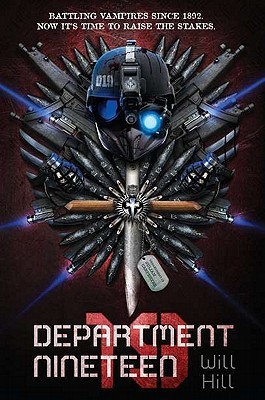 Jamie Carpenter discovers the existence of the secret government agency Department 19 the hard way after his father died and his mother was captured, and he was rescued by a giant of a man who just happens to be named Frankenstein. The department was founded by Abraham Van Helsing and those who put a stop to Dracula over 100 years ago in order to police various supernatural threats. If Jamie wants to save his mom from an insanely powerful vampire, he'll have to work with the Department and come to terms with his family history.

Department Nineteen by Will Hill is absolutely perfect for fans of The Monstrumologist series by Rick Yancey and the Cirque du Freak series by Darren Shan. I'm so pleased to have stumbled upon this novel at a bargain outlet store. This is my kind of YA horror/ urban fantasy. Thankfully, the vampires are also my sort, i.e. they don't sparkle and are actually pretty scary. I also particularly enjoyed the alternate history lesson featuring Bram Stoker and those very real people who took that titular vampire, Dracula. Plus, seeing how the secret government agency that combats the paranormal got started was great. The only reason I knocked this down to four stars is that Jamie can be difficult to like in his anger and sullenness. Overall, though, this is just the kind of vampire book that I was looking for. I will definitely be continuing this series with The Rising!