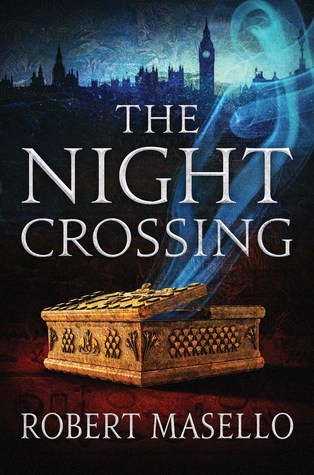 An intrepid explorer discovers a mysterious golden box in the Carpathian Mountains. She is unaware of the danger it poses and she takes it home to Victorian London - unaware that evil has already started to take root in the city. Bram Stoker, a theater manager and frustrated writer, finds himself pulled into the nefarious plan of the rich owners of a mission house for the poor. The shelter isn't the safe haven it promises to be, but instead harbors a horrific secret. Stoker, the explorer, and a mission resident grieving the loss of her child must work together to save their city from ancient Egyptian enemy, but first they'll have to survive London's overgrown graveyards, rat-infested tunnels, and even the maiden voyage of the Titanic.

I'm so pleased to find out I was approved to read this novel - I mean, how could you go wrong with a historical fantasy horror featuring the legendary authors Bram Stoker and Arthur Conan Doyle? As it turns out it works out really well with only a few minor issues. Like I know I've mentioned before, historical fantasy is one of my favorite genres to read and I love how Masello combines real history, and real facts about Bram Stoker and Arthur Conan Doyle with awesome fantasy elements. I've always been interested in Egyptian mythology and it's pretty interesting how the author integrates that with real world Victorian London. My only major issue with this story are in the number of POVs. They all move pretty quickly and held my interest once I got into the swing of the style, but I only found myself truly invested in Bram Stoker's perspective chapters. Honestly, I could have done without at least one fewer POV - the novel may have flowed a little more without it. I will say, though, that I enjoyed how things begin to come together with Stoker at the lead.

Overall, The Night Crossing by Robert Masello is a creative and unique scary historical fantasy novel. It is definitely must-read for fans of the author Bram Stoker, who begins to find inspiration in the horrific events going on around him for what eventually becomes Dracula. Even though I had a few minor complaints I was still quite addicted and on the edge of my seat to see what would happen. This is my first experience reading Masello, but I'm going to have to read more from him in the future and I believe I'll have to start with The Jekyll Revelation.  Thanks again, NetGalley!