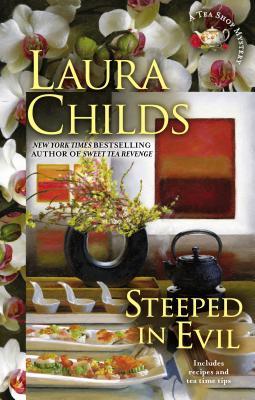 Theodosia Browning, a tea shop owner, has a knack for solving crimes (better than the police force, apparently). When a body is found in a wine barrel at the fancy Knighthall Winery tasting ceremony, she is asked to look into things by the victim's family due to their dissatisfaction with the official investigation. By the way, the victim happens to be the owner's son and Theo has plenty of suspects to pick from because it seems like everyone involved from family to winery employees has something to hide.

Like I've said in the past, the cozy mystery is not my go to sub-genre when it comes to mystery. Steeped in Evil is the fifteenth book in A Tea Shop Mystery series by Laura Childs, and based on my reaction to my first time ever reading anything by this author, I don't feel compelled to go out and read the any of the other books in the series or any of the others she writes. I get the impression they would all feel very much the same...

Now, when I started reading I didn't even look at the book description (since I would be reading it for a book club regardless), but I guessed who was in the barrel from the moment Jordan Knight said he couldn't find his son and when Theodosia said the "red wine gushed out like rivers of blood", what else could it be, right. The opening also reminded me very much of an episode of CSI, I mean, if it hasn't already been done by CSI, I would be very surprised. At the end of the first chapter, I could just imagine Horatio at the crime scene giving this corny one-liner, "I guess he...couldn't hold his liquor."

As for the mystery, it's not too difficult to figure out. Maybe not the details, but I had the villain picked out pretty early on (I'll give you a hint, the person is present during the wine tasting ceremony) and seeing as I've watched plenty of police procedurals, I had a sense of how the author was going to take it. The who is easy, the why requires a bit more brainpower, though. I just want to say one thing about how Theodosia catches the villain - ridiculously not on par with the rest of the book.

In regards to the heroine, I feel indifferent to her character. I expect I would have felt less detached if the story was told in first person perspective from Theodosia herself; however, it seems like there is too much of a gap between character and reader as it is. I also expect I would have felt more attached to the character(s) if I bothered to read any of the other books in the series. The most memorable member of the supporting cast is Haley, the chef back at the tea shop, for her enthusiasm.

The aspect of this novel that the author really excels at are setting and the descriptions - everything has a personal touch. If I didn't know this was set in Charleston, South Carolina, I would have guessed it was set in a small town where everybody knows everyone else. My favorite part is easily all the talk of Downton Abbey - it's really an excellent show. Unfortunately, those themed recipes aren't included with the recipes in the back of the book.

If you're a big fan of cozy mystery style, you'll probably enjoy Steeped in Evil by Laura Childs. I, for one, would have preferred to watch the CSI: Miami version of this story just so I could hear Horatio come up with that one-liner, and get that gross body-dive necro cam angle of the victim being shot and stuffed into a wine barrel.